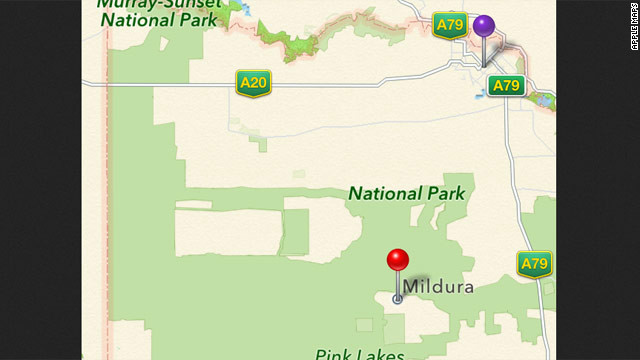 According to Australian law enforcement personnel, a flaw discovered in Apple’s Maps application could prove deadly for motorists if action is not taken. Pictured above is the city of Mildura, although that is not where the city is actually located. Apple has placed the town some 40 miles in the Outback, an environment that if not prepared for or you happen to become stranded in, offers very little in terms of road side service.

Unfortunately, a few Maps users have already found themselves in this situation, needing to be rescued by emergency crews and were found with zero water supply.

Some of the motorists located by police have been stranded for up to 24 hours without food or water and have walked long distances through dangerous terrain to get phone reception.

We like poking fun at Maps due to its laughable launch, but let us not forget Google’s failed launch of the Nexus Q. Although, I don’t recall the Q being blamed for anyone getting stranded in 114 degree weather with no food or water. Maybe that’s something we’ll get at this year’s I/O?