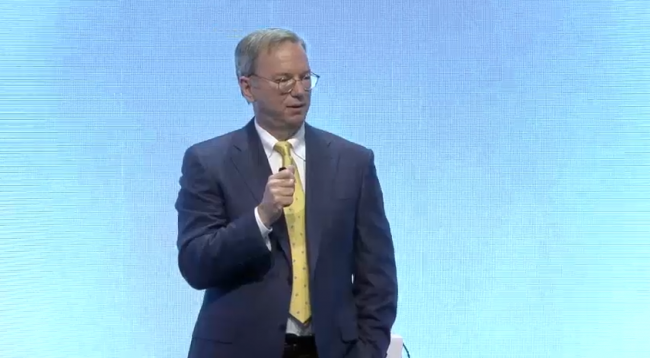 Eric Schmidt is Google’s Executive Chairman and also the company, and Android’s, biggest cheerleader when it comes to the media. In a recent interview, Schmidt sat down and talked business about a lot of things going on with Google and the conversation inevitably leaned towards their patent struggles with Apple. Schmidt said, “It’s extremely curious that Apple has chosen to sue Google’s partners instead of Google itself.” But he didn’t stop there.

He continued about Apple v Google, “The adult way to run a business is to run it more like a country. They have disputes, yet they’ve actually been able to have huge trade with each other. They’re not sending bombs at each other.” It seems as if there is a mutual respect between the two companies, but Schmidt would like to see it go down in a different way.

Schmidt was also asked about the juicy rumor that Google is looking into making their own wireless carrier, to which Schmidt didn’t really say no. After saying that their current focus is Kansas City and their new Google Fiber, Schmidt said “The current spectrum shortage is real, but it’s an artifact of a licensing and regulatory error. New technology allows there to be lots of spectrum, far more than you could use.” Sounds like Google might just be waiting on this “new technology” before launching into the spectrum game.