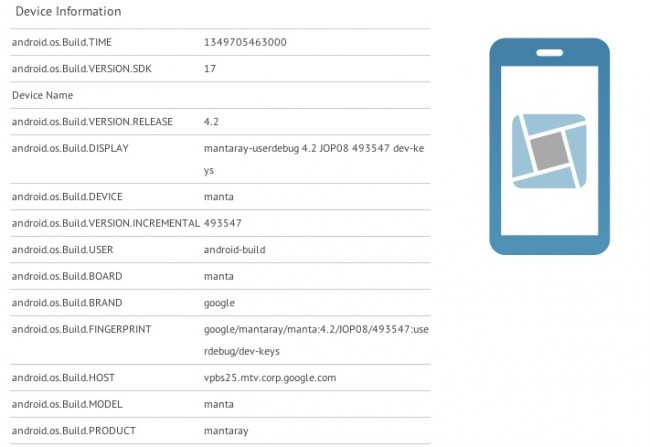 The Samsung Nexus 10, which rolls under the codename “manta,” popped up at GLBenchmark today, giving us the first look at specs for this mostly-mysterious tablet.

First, we get confirmation on the incredibly high display resolution of 2560 x 1504. It’s not showing the full 1600 because the on-screen navigation area likely takes up 96 pixels during the benchmark. We can see that the device will also fall under the software build name of “mantaray” and run Android 4.2 at launch.

Beyond those tidbits of info, we now know that the Nexus 10 will run a 1.7GHz dual-core Exynos 5 processor with a Mali-T604 GPU. For those not up on the processor game, just understand that this is Samsung’s first Cortex A-15 processor, which means it’s their best to date. The Exynos 5 is up to 2x faster than Cortex A-9 dual-core processors, and has 30% lower power consumption than the previous Exynos chips. It also sports an ARM Mali-T604 GPU, which should turn gaming into an unreal experience, especially on a tablet with a big display and crazy resolution.

How can this device not appear at Monday’s Android event?