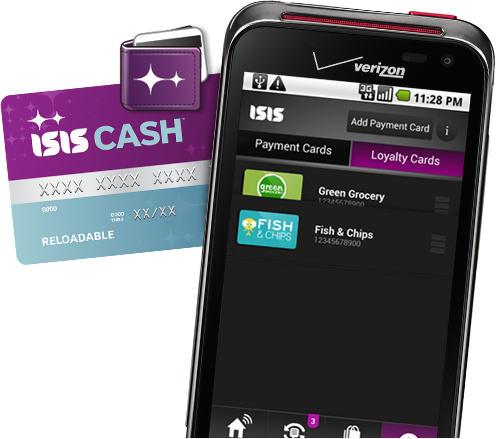 As was announced by Isis PR briefly last week, the first two test markets for their Isis Mobile Wallet application go live today, October 22. AT&T, T-Mobile and Verizon all have “Isis Ready” handsets available, so if you live in either Salt Lake City, UT or Austin, TX, you will want to stop by a store to receive a new NFC SIM card. After that, you will need to download the Isis app from the Google Play store, before you take off on a shopping spree.

There are a total of 11 devices that are “Isis Ready” today, only one from Verizon – the DROID Incredible 4G LTE. Isis plans to have 20 available by the end of the year, between all carriers.

Update:  Verizon released a statement moments ago, detailing their plans for Isis. In it, they mentioned that the DROID RAZR HD and RAZR MAXX HD will have Isis support by the end of the week (only in the test markets, of course).

ISIS, a joint venture among Verizon Wireless, AT&T and T-Mobile, is doing just that. On Monday, Oct. 22, customers in Salt Lake City and Austin will be able to download the ISIS Mobile Wallet from Google Play to the DROID Incredible 4G LTE by HTC, visit stores in Austin and Salt Lake City to get a new SIM card, then add their credit, debit and loyalty cards into the Wallet and begin using it at many retailers in both cities. ISIS Mobile Wallet will be available on the DROID RAZR HD by Motorola and DROID RAZR MAXX HD by Motorola this week.

Still no word on a nationwide rollout of the service.

Isis™ Launches in Austin And Salt Lake City; as many as 20 Isis Ready™ Handsets to be Available by Year End

“The launch of the Isis Mobile Wallet in Austin and Salt Lake City represents a milestone for both Isis and the mobile commerce industry,” said Ryan Hughes, chief marketing officer, Isis. “With as many as 20 Isis Ready handsets headed to market by year end, we are experiencing an unprecedented level of support for NFC and consumer choice.”

How to Get Started With the Isis Mobile Wallet on October 22:

“The launch of the Isis Mobile Wallet is an important step toward accelerating mobile payments in the United States and maximizing convenience for consumers” said Bill Gajda, head of mobile product, Visa Inc. “Isis’ open approach directly aligns with Visa’s strategy of enabling consumers to make mobile payments with whatever device they choose using the trusted accounts they already have.”

“MasterCard has been working with industry partners like Isis to turn mobile phones into secure payment devices and create better shopping experiences for both consumers and merchants,” said Mung Ki Woo, group executive, mobile, MasterCard Worldwide. “The use of NFC technology is a path to an improved consumer experience, and the launch of the Isis Mobile Wallet – combined with the growing number of NFC-enabled handsets – will help make mobile commerce a reality for millions of consumers.”

“Today’s launch of the Isis Mobile Wallet is a significant achievement in terms of enabling consumer adoption of mobile payments,” said Suzan Kereere, senior vice president and general manager, American Express, Global Network Business.  “Mobile commerce holds the promise of dramatically enhancing consumers’ shopping experience, and American Express’ first priority as a network is to provide choice and flexibility for all industry participants as we work together to influence the speed and growth of mobile NFC payments in the U.S.”

The joint venture is between AT&T Mobility LLC, T-Mobile USA and Verizon Wireless and is based in New York City. The venture is chartered with building Isis™, a national mobile commerce venture that will fundamentally transform how people shop, pay and save. The Isis™ mobile commerce network will be available to all merchants, banks, payment networks and mobile carriers. ISIS is a trademark of JVL Ventures, LLC in the U.S. and/or other countries.  Other logos, product and company names mentioned herein may be the trademarks of their respective owners.