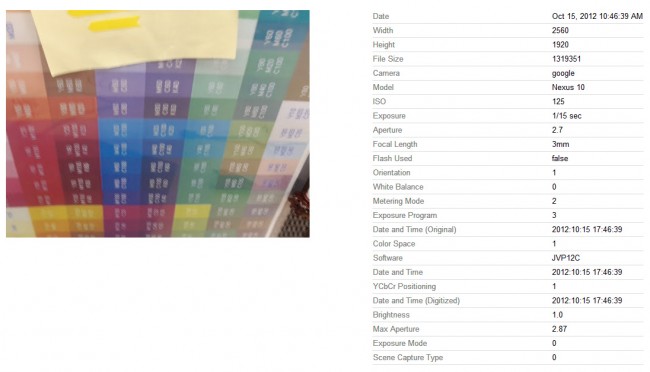 During our inaugural Droid Life Show, we discussed the rumors surrounding the Nexus 10 and many readers in chat expressed an interest in the device. Even though we don’t expect to see this ultra-high resolution tablet until next year, evidence today suggests that Samsung and Google are hard at work.

Picasa has revealed many new devices in it’s history, and someone (rumored to be a Samsung worker) has used it to upload a photo from the Nexus 10. Notice the name “Nexus 10,” camera as “google,” and the software build of JVP12C, a very new build of Jelly Bean. Those signs certainly point to an unreleased Nexus type of device. What other tablets and phones see early builds of Android, this early?

The Nexus 7 only had a front-facing camera to keep costs down, but this photo of a color testing sheet, seems to be shot with a rear-facing one. This assumption, paired with the high res screen that it will allegedly ship with, means Google might be aiming for the high end tablet market with the Nexus 10.

What do you think? What price range would you pay for a super-high res 10″ Nexus tablet?