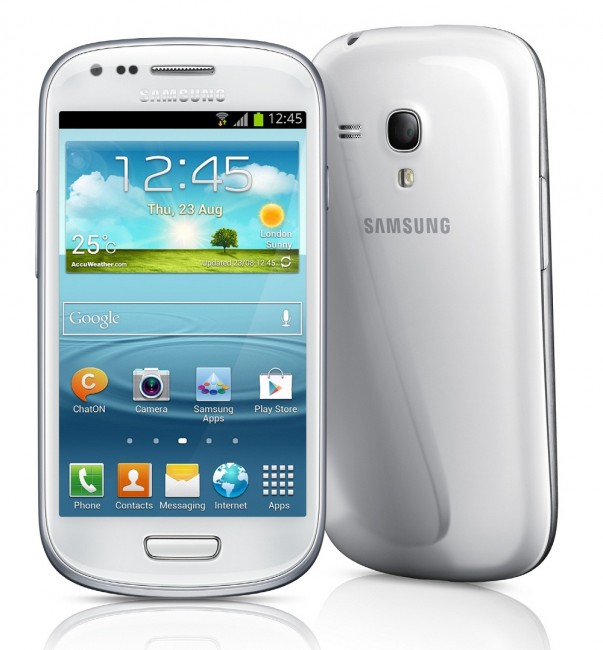 This morning, Samsung has officially unveiled the Galaxy S3 Mini in Germany. The device, much like its big brother incorporates the same “Inspired by Nature” design, but in a smaller package. It features a 4″ 800×480 Super AMOLED display, 5MP camera, 1GHz dual-core chip, and 1GB of RAM. It’s nothing to scoff at, but this device is not being  pushed as a super device.

More than likely this device will look to take over the mid-range mobile space by taking on Motorola’s RAZR M and other similar devices. The device’s availability and pricing is still unknown, but the version unveiled comes with HSPA radios. No word yet on any CDMA or LTE compatibility.

a compact version of the flagship smartphone GALAXY S III.
The GALAXY S III mini brings the high performance, intuitive ease-of-use and nature-inspired design of the GALAXY S III to an elegant,
compact smartphone with a 4.0-inch screen. It can be an optimal choice for consumers who are looking for more practical smartphones.

“The GALAXY S III introduced a new concept of smartphone that has proven hugely popular around the world.
We’re now delighted to bring its revolutionary design, intuitive usability and intelligence to the GALAXY S III mini in a more compact form,” said JK Shin, President and Head of IT & Mobile Communications Division at Samsung Electronics. “We continue to make every effort to provide extraordinary mobile experiences to meet a wide variety of user needs.”

The GALAXY S III mini is powered by Android™ 4.1 (Jelly Bean), the latest version of the world’s most popular smartphone operating system.
Jelly Bean has fast, fluid and smooth graphics along with a new Google Search™ experience featuring Google Now™, which brings you just the right information, before you even ask.

The GALAXY S III mini is packed with intelligent technology designed to make interacting with the phone incredibly natural and intuitive.
S Voice, Samsung’s advanced natural language recognition software, lets you use your voice to unlock the phone with
simple customized commands, or to play your favorite songs, turn the volume up or down, organize your schedule, or automatically launch the camera and start taking photos.

The GALAXY S III mini also understands your gestures to make using your phone easier and more natural: With Smart Stay,
the phone’s camera tracks your eyes and keeps the screen lit as long as you are looking at it. When reading a text message from a friend,
Direct Call enables you to automatically dial a call simply by lifting the phone to your ear; and Smart Alert conveniently alerts you to missed calls or messages as soon as you pick up your phone.

Content sharing is easy and fast on the GALAXY S III mini: Its S Beam feature lets you share a 10MB music file in just two seconds
by simply tapping on another S Beam-enabled device including GALAXY S III or GALAXY Note II, even without a Wi-Fi or cellular signal.
The ‘Buddy photo share’ function also allows photos to be easily and simultaneously shared with all your friends pictured in an image directly from the camera or the photo gallery.