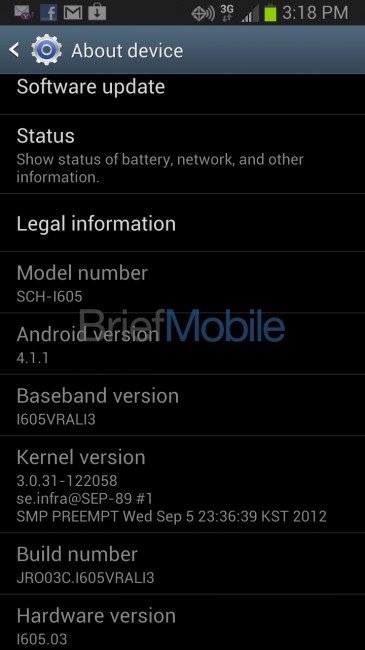 Remember how frustrated you were when Verizon passed on the original Samsung Galaxy Note? You likely won’t have to entertain that feeling again, as reports of a version of the new Galaxy Note 2 with Verizon radios and branding has surfaced today, along with a screenshot.

The model number for the device will be SCH-I605, which matches up nicely to previously released Samsung devices on Verizon. The device will also reportedly run a quad-core Exynos processor and work on Big Red’s 4G LTE network. Everything else inside should remain identical to what we saw unveiled at IFA last month. You should see the 5.5″ HD Super AMOLED display, 2GB RAM, 8MP rear camera, 1.9MP front camera, 3100mAh battery, 16/32GB internal storage, microSD slot for expandable storage, and Jelly Bean (Android 4.1).

Samsung appears to be attempting to push this device the exact same way that they did with the Galaxy S3. It should hit all carriers in the U.S. with the same form factor, an approach we can’t say enough good things about.

Ready for the Note 2?