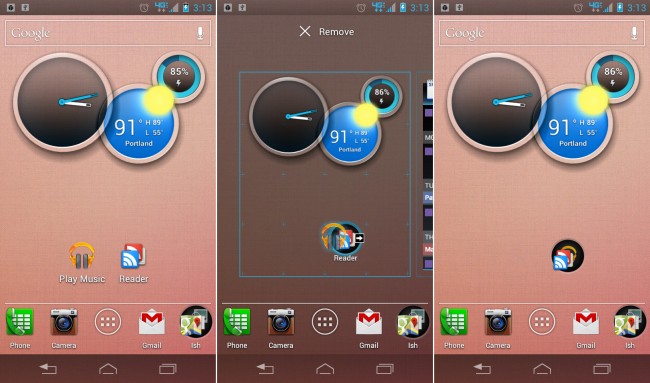 When the Android team initially introduced us to Ice Cream Sandwich, one of the first features they showed off was the ability to quickly create folders of apps. The method is exactly the same in Jelly Bean, so even if you are still running Android 4.0, nothing on this front will change once you go to Android 4.1. And trust me, that’s a good thing because it doesn’t get any easier than this.

Instructions (Most Android phones, not including the Galaxy S3):

1.  To initiate a folder, you need to have two apps.
2.  To begin, grab one of those apps by long pressing and drag it over the top of the other.
3.  Once you hover one over the other, a circle should appear around the bottom app.
4.  With the circle showing, let go of the app you are holding onto.
5.  This should create a circle (folder) with two apps in it.

6.  To access that circle (folder), simply tap on it and a mini-window appears with your apps in it.
7.  You can drag and drop additional apps inside it if you’d like.
8.  You can also rename your folder by opening it, tapping in the text area, and then typing a name.

1.  Some Samsung phones have eliminated the quick drag and drop folder method.
2.  In order to create a folder, you can press Menu>Add Folder from a home screen.

*Or you can grab an app from inside the app drawer and look for an “Add Folder” option at the bottom of the screen. If that shows, drag your app there to have a folder created on your home screen.

3.  Once your folder has been created, you can drag and drop additional apps just like we did above.

*The rest of the Android Beginners’ Guide is a one-stop shop for all of those new to Android.