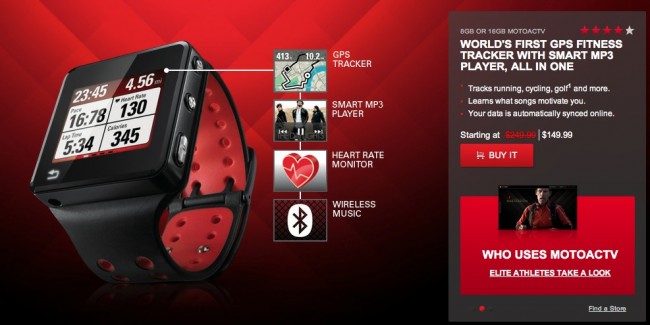 The Motorola MOTOACTV fitness tracker has been reduced significantly in price over the last week or so. Originally introduced at $249 for the 8GB model, you can grab one today for as little as $140 at some stores, but $149 seems to be the standard price. When purchasing, the MOTOACTV also comes with a watch strap now, something that was an extra $30 at initial launch. If the 8GB model doesn’t sound like it contains enough storage, you can find the 16GB version for as little as $180 at retailers like Walmart.

For those that haven’t followed our coverage of the MOTOACTV, just know that this has quickly become one of the finer fitness products around. This fitness tracker has golf software for scoring rounds, tracks dozens of fitness activities, syncs with a solid web interface, has companion apps that allow you to receive Facebook or Twitter updates, shows you notifications for calls and texts, and even has built-in GPS. This may also sound odd, but Motorola updates this thing like crazy and is always listening to users on how it can be improved. At launch, it may have been overpriced. Now, this almost seems like a steal.