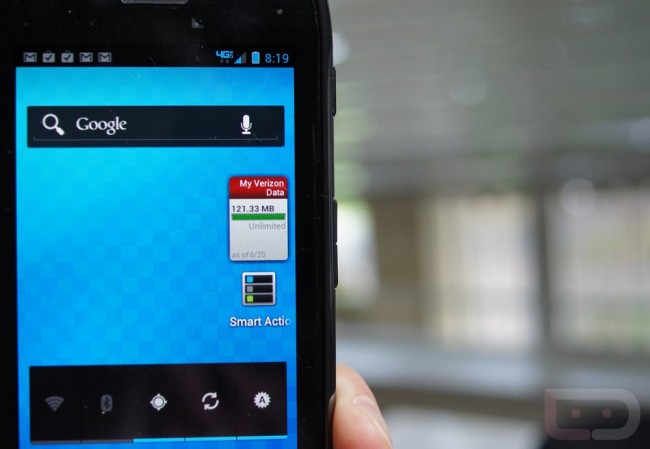 For reasons unknown, Verizon has decided to kill off the Data Usage widget that is included in the My Verizon app. Over the next couple of days, users who have the app installed will be notified that an update will remove the widget from their phone, but that they can remove it themselves today, if they’d like. It’s a puzzling move because Share Everything will be here in 2 days, which means people will need to know the current status of their data usage now more than ever. In the mean time, they are recommending that you dial #DATA to track usage.

Beginning 6/25, Verizon Wireless will no longer offer the Data Widget. From 6/25 – 6/27, users will be asked to update My Verizon Mobile. Once available, customers will receive a software update which will remove the Data Widget from their device and they will be unable to re-install it.

Beginning 6/25, upon touching/selecting the Data Widget, My Verizon Mobile will launch and display a pop-up window with the following message:

“As of June 25, 2012, the My Verizon Data Widget will no longer be supported. We will send a software update to you when it becomes available. At that time, the widget will be automatically removed from your device.

If you prefer, you may remove the widget from your device now by touching and holding the widget to move it to the red remove section on your screen.

To check your data usage, visit My Verizon Mobile via the App Tray or dial #DATA.”

Before we all start in on the, “Here we go again, Verizon trying to screw us over!” stuff, let’s give them a chance to release a new way to track data. I can’t imagine that they don’t already have something in the works that will be introduced on Thursday or shortly thereafter. Since Share Everything plans are quite the change, this current widget probably won’t work any longer, hence the reason for killing off this current widget.

Update:  They do have a new widget on the way. As we suggested, the old one won’t work with Share Everything, so they needed to create something that would.

Cheers Robert, Ross and everyone else!