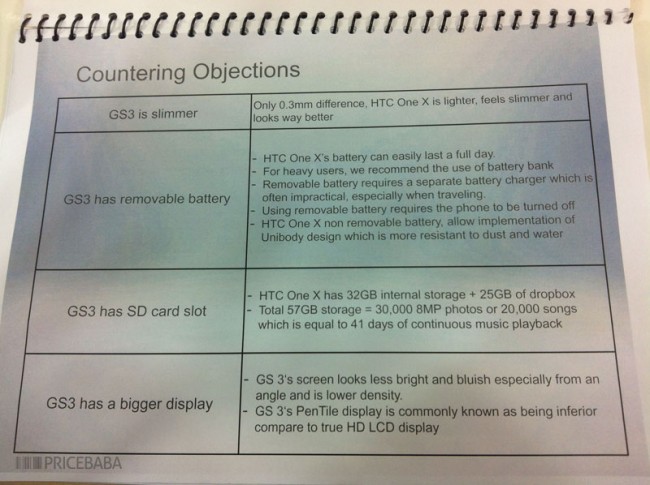 According to documents obtained by shopping site PriceBaba (and assuming they are real), HTC wants its sales staff to know exactly why they believe the One X is better than Samsung’s new Galaxy SIII smartphone. Through a pamphlet or flipbook of sorts, HTC compares specs of each phone, but also tosses in some biased flair, which you would expect. Is the One X superior to the Galaxy SIII? If only there was a simple answer to that. What we want to talk about though, are some of the arguments that they use which made us giggle.

First up is the argument that a removable battery is a bad thing because you would need an external charger to charge it with. Clearly the creator of this document does not realize that the point of having a removable battery is so that you can swap in a spare or use an extended battery in place of the low mAh OEM one that came with the device.

Second, their SD card and memory claims are hilarious. The One X has 32GB of internal storage along with 25GB of Dropbox storage. That’s nothing to be ashamed of, however, the Galaxy S3 has 32GB of internal storage, an SD card slot that supports 64GB cards, and Samsung is also willing to give you 50GB of Dropbox storage on the side. I don’t think I need to do the math for you to realize the winner in that argument.

The rest of the stuff in there is mostly opinion, so we won’t harp on it too much. After all, this is HTC’s document, so they should be selling the hell out of it to their sales staff.

I will say a couple of things in defense of the One X. It is still the most beautifully designed phone ever, in my opinion. The screen also cannot be beat by any phone that I have used and that includes the Galaxy SIII. Unfortunately for HTC, the One X just won’t have the adoption rate or community that the GS3 will and that’s a turn off to a user like myself. For the most part though, these phones are on the exact same level, but it’s up to the user to decide which spec bump here or there makes one better than the other.

So tell us, One X or Galaxy SIII?

Via:  The Next Web | PriceBaba