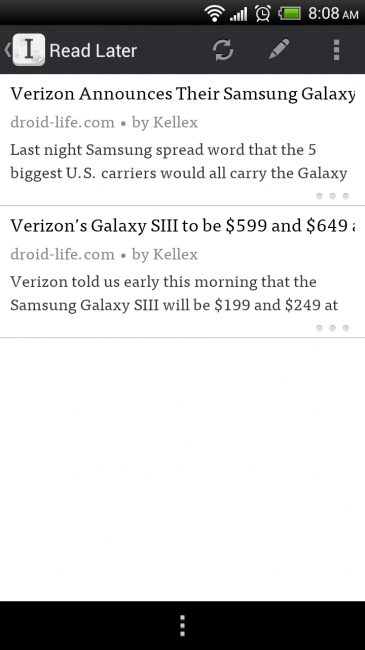 Familiar with Instapaper? It’s this ultra-popular iOS read it later type of app that apparently, some Android users have been begging for. Think of it as the most minimal app on the planet that allows you to catch up on articles you may have started earlier in the day, but would like to finish later. At $2.99 though, we are trying to figure out how the price is justified. Pocket (formerly Read It Later) is free and in my opinion, much more beautifully designed and with more features. Plus, I watched Instapaper’s developer the other day talk about design and being minimal, yet he couldn’t even code the legacy menu button out? That would be the awful looking black bar at the bottom of all of those screenshots.

To be fair, the app does function as advertised. It is minimal, but with just the right amount of features to allow it to get the job done. It’s up to you to decide if you want to pay that price.