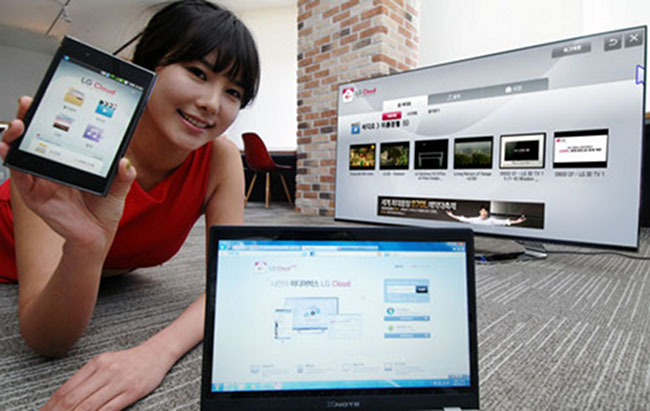 Look at you LG, beating Samsung to an idea that they will potentially unveil this Thursday along with the Galaxy S3. It’s another cloud service! Just what we need!

So yeah, LG has announced LG Cloud this morning as the “first real streaming multimedia cloud for all three screens.” (I don’t know why, but that title is hilarious.) This new cloud service will allow you to stream photos and video from your phone to PC to TV to PC to phone to TV and back again and again “almost instantaneously.” The apps are all free, but in order to get your TV into the game, it will have to be a Smart TV produced by LG. We can’t tell if your phone needs to be made by LG or not, but the Play Store is currently showing that none of my phones are compatible, so that could very well be the case.

SEOUL, APR. 30, 2012 — LG Electronics (LG) announced the beta opening of LG Cloud service on May 1 with the aim of providing seamless connectivity and streaming access to all digital content across various electronic devices. Although cloud is today’s hottest IT buzzwords, LG Cloud is the first that allows users to manage and consume all types of content on “three screens” which includes Android smartphones, PCs and smart TVs (including but not limited to CINEMA 3D models) without a separate set-top box.

To use the service, users need to download the LG Cloud app from Google Play or LG SmartWorld app store from their Android smartphones, LG SmartWorld store from their LG Smart TVs or the LG Cloud website (www.lgecloud.com) from their PCs or laptops. LG’s Cloud service automatically synchronizes smartphone content with the cloud server and the user’s PC and TV. Photos and videos taken with the smartphone can be viewed and streamed to the PC or TV almost instantaneously. Videos edited on a PC can be uploaded to LG Cloud for viewing seconds later on a smartphone. Unlike other cloud services, there’s very little waiting or lag time since the content is streamed to the TV, PC or smartphone, not downloaded first.

The difference is in LG’s Real-time Streaming Transcoding technology. The conversion happens on the server in realtime, not on the device. There is no need to worry about installing codecs or converters, everything happens seamlessly and in the background with no involvement from the user. No other cloud service can make this same claim.

The service also works perfectly with 3D content. Vacation videos taken with an LG 3D smartphone can be uploaded via 3G or Wi-Fi to the LG Cloud service. Back home in the comforts of the living room, the family can watch the vacation footage as it streams from LG Cloud to their LG CINEMA 3D Smart TV in superb three dimensions.

“Most companies today only see the cloud as a storage device or in the case of YouTube or Flickr, only for one type of content,” said LG’s Mr. Kwon. “LG makes the devices that millions of people watch content on so we can set a new yardstick for ease of use by setting up our own cloud service. Tomorrow’s consumers don’t want to go to one cloud for music, another cloud for video, another location for photos and yet another cloud for their office files. In the end, our solution is about making life more convenient.”

LG Cloud will be offered as both a free and paid service. Free storage space and pricing will differ market to market and will be announced separately as the service becomes available in that country.