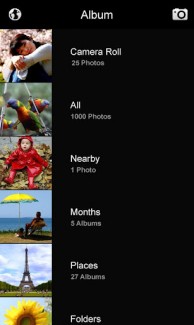 Back around MWC, we showed you an app called Scalado Remove which was a nifty little app that allowed you to remove unwanted objects from pictures you had just taken. The app was essentially created to be licensed by OEMs, so don’t expect to see it in the Play Store any time soon. It’s creators didn’t stop there though. They still wanted to create a public offering after receiving much praise over Remove and have done that today with an app called Scalado Album.

Album is for the most part, a gallery replacement. It doesn’t have any mind-blowing features to sell to you, other than the fact that it is crazy fast. After experiencing different OEM skins along with stock Android over the years, slow gallery loading, picture flipping, etc. has always been a bit frustrating to me. This app from the Scalado team is like a breath of fresh air with its speed. It loads up swiftly and then allows you to bounce between photos or by pinching and zooming without a stutter.

And along with that speed, they have done some nice things on the location front as well. Album allows you to view the the exact spot that you snapped photos from via map. It’s sort of iOS-esque in that it drops pins on the spots that you took these pictures, but it could give the ultimate traveler in the building a nice visual representation of their lives.