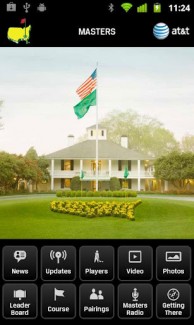 Hello, friends. The Masters is just over a week away and that means it is time to load up the official app for golf’s Super Bowl and get to studying. We wouldn’t want you referring to anyone as a fan or spectator next week, would we? They are patrons, people. It’s a tradition unlike any other. Make Jim Nance proud.

In all seriousness, the app brings you live coverage of Amen Corner, holes 15 and 16, the Par 3 Contest on Wednesday, and footage of two featured groups which you know is going to include Tiger Woods, ya’ll. The Play Store says that it is compatible with every single device I own, so here’s to hoping the Galaxy Nexus can actually stream video unlike some other prominent sports apps. “Get in the hole!”