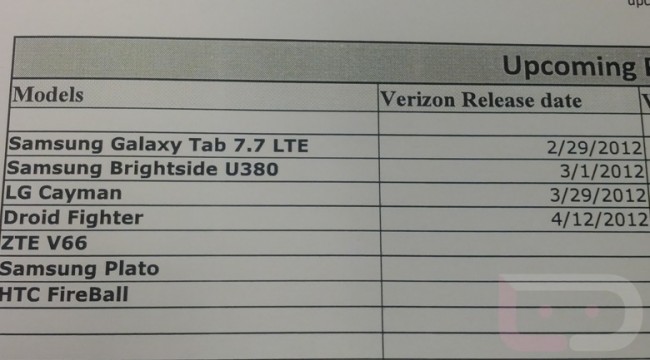 A couple of weeks ago, we first reported two new devices that were headed to Verizon as the LG Cayman and DROID Fighter. That report included the same dates you are seeing above of 3/29 for the Cayman and 4/12 for the Fighter, but were then only listed as “workshop” times rather than release dates. According to new information that we received, those are indeed targeted release dates.

We should point out that the LG Cayman is likely the Lucid 4G that we reported on last night. The DROID Fighter is still a mystery for now.

You will also see the HTC Fireball listed without a date, a device that our sources are now referring to as the Incredible 4G. A device by the name of Samsung Plato is listed as well, and is one we haven’t seen mentioned since last August. Knowing that it was rumored all of the way back then, we would be surprised if this was anything other than a mid-range device. Then again, “Plato” would be a nice codename for a Galaxy type device.

While Verizon was quiet during MWC (which they almost always are), they do still have plans for the next couple of months. The first part of March could be slow unless they decide to drop the Incredible 4G on is within the next couple of weeks.