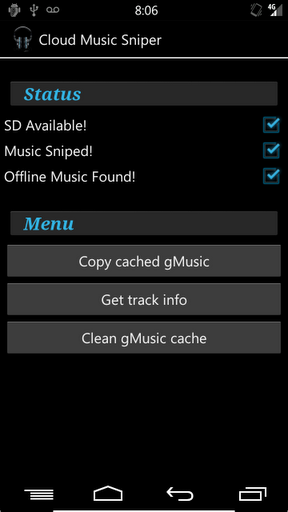 One of the biggest irritations when it comes to Google Music has been the fact that the service has not been opened up so that other music players can take advantage of it. Whether you are streaming content or holding it offline for connection-less consumption, you are forced to use the Google Music player. It’s probably a DRM or security thing, but we really wish there could be a way to at least stream your music through another music app.

With that said, an app called Cloud Music Sniper is bit of a step in that direction. Cloud Music Sniper allows you to grab all of your offline cached Google Music and convert it over so that other music apps can access it. From what we understand though, this will essentially create two identical music folders (one cached folder and one sniped folder), so you will want to remove your offline cached copy through Google Music once you have sniped to free up space.

So it doesn’t address streaming into other apps, but it does give you somewhat of an option if you are on the go and need to have your music collection available.