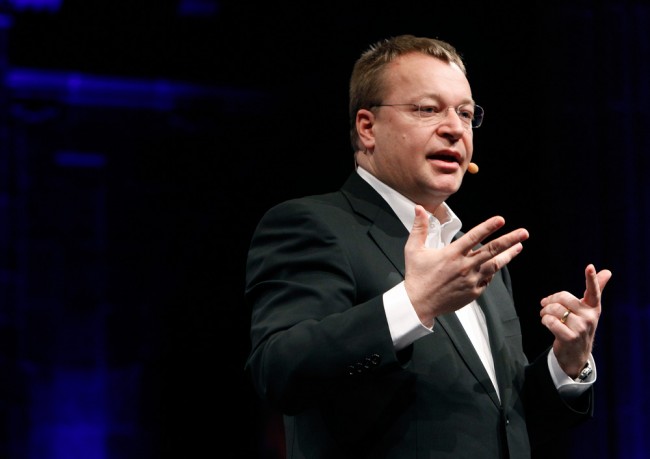 So this story from Pocket-Lint is floating around the web today that quotes Nokia’s CEO Stephen Elop. Not that this should surprise anyone coming from the guy that is betting the bank on Windows Phone 7, but he of course referenced Android and this mythical fragmentation problem it has. He is quoted as saying that he doesn’t want fragmentation “being introduced” to Windows Phone because “we are” starting to see it “become a problem” in a “certain other eco-system.”  And time for a rant…

I could go into how idiotic the CEO of one of the biggest companies in the world sounds when making this argument, but I’ll instead just throw some numbers at you and let them do the talking. According to January’s Android distribution chart, 86% of Android users are running two variations of the operating system:  Gingerbread and Froyo. The other 14% is a mix of pre-Froyo phones that are 2-3 years old and will soon vanish from the face of the Earth along with Honeycomb that will also disappear since this version of Android essentially will no longer be supported going forward. All Honeycomb tablets will be upgraded to Ice Cream Sandwich making the 3.0+ category in this distribution chart go bye-bye.

So within the next 6 months, you could in theory see 2.1 and below phones and their 10% share shrink even more now that most of the people with them are ready for upgrades. Those people will then upgrade to a newer Android phone, adding to the piece of the pie that includes Gingerbread or Ice Cream Sandwich, since Froyo phones are pretty hard to come by these days. So then we are looking at most Gingerbread phones receiving updates to Android 4.0, some sticking behind permanently at 2.3, and then another soon-to-be-dying set at 2.2. By the end of the year, we could be sitting on a chart that really only has 3 versions of Android on it, the majority at 4.0 and 2.3.

Is that really fragmentation? Even Apple can’t keep all of its iPhones and iPod Touches on the same version of iOS these days, yet we aren’t hearing these arguments directed at them. And then we could go into Elop’s Windows Phone 7. Even their newly released phones enter with a newer OS than previous models, who then have to wait to receive updates. This is simply how the mobile industry works. Actually, this is how the entire tech world works. You introduce a new product, it likely has a newer OS than the one you released 6 months prior. But I digress.

Elop seems adamant that Android is suffering from some major problem that we are struggling to find. When we look at say, yesterday’s Nielsen numbers, Android’s “fragmentation” allowed it to grow to 46.3% of the overall smartphone share in the U.S. And during that time, his Windows Phone 7 OS that is apparently not fragmented, was barely able to make the same chart, coming in at 1.3%, which just so happens to be lower than Windows Mobile at 4.6%.

What I’m trying to say is, that Android may have had a “fragmentation” issue back in 2009 when apps weren’t compatible with different versions of the OS, and when manufacturers were so new to the game that they struggled to release updates in a timely manner. In 2011 and 2012 though, you can no longer talk fragmentation. And if you want to call whatever it is that Android is doing a “problem,” I would suggest that a dying platform like WP7 look into said “problem” to decide if it can help their cause. This argument is over.