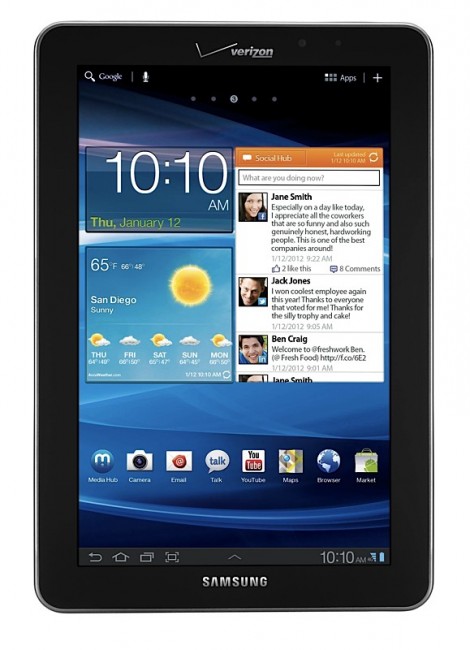 Verizon and Samsung today announced another device that we first reported on a few weeks back, the Galaxy Tab 7.7 with 4G LTE. It rocks a 1.4GHz dual-core processor, 7.7″ Super AMOLED Plus display, is extremely thin (thinnest LTE tablet), has a 3MP rear camera, 2MP in the front, 16GB of on-board storage, an SD card slot for extra storage, and weighs roughly 340 grams. The 7.7 is running Android 3.2 with TouchWiz – no word was given on an Ice Cream Sandwich update, but we will assume that it will eventually get it.

The Galaxy Tab 7.7 will be available in the coming weeks. Both Verizon and Samsung will have it on display in their booths, so you can bet that we will get some hands on time with it.

Pics and press release below. 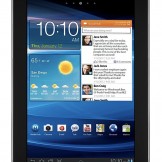 LAS VEGAS and BASKING RIDGE, N.J. – From the 2012 International Consumer Electronics Show (CES), Samsung Telecommunications America (Samsung Mobile), today announced that the Samsung Galaxy Tab™ 7.7 will be available on the Verizon Wireless 4G LTE Mobile Broadband network in the coming weeks. Verizon Wireless leads the way in 4G with the fastest and most reliable 4G network in the United States, covering more than 200 million people in 190 markets. The Samsung Galaxy Tab 7.7 will be on display at CES 2012 in Verizon Wireless’ booth (Las Vegas Convention Center, South Hall, Booth #30259) and in the Samsung booth (Las Vegas Convention Center, Central Hall, Booth #12004).

The Samsung Galaxy Tab 7.7 boasts a brilliant Super AMOLED™ Plus touchscreen display, allowing customers to watch movies, view pictures and play games that come to life in high-definition 720p (1280×800) resolution. The Galaxy Tab 7.7 features a 1.4 GHz dual-core processor and HTML 5 Web browser to quickly access the Web, stream music and more at blazing speeds using the Verizon Wireless 4G LTE network. The Galaxy Tab 7.7 measures just 7.9 millimeters thin (less than half an inch) and weighs only 340 grams (roughly 12 oz), making this tablet one of the most portable premium and stylish tablets available.

The Galaxy Tab 7.7 features Peel Smart Remote that allows customers to find and watch their favorite TV shows and discover new shows based on their preferences through built-in infrared blaster. Customers can also control their home entertainment system using Peel Smart Remote regardless of manufacturer with the Tab 7.7, all with the tap of a finger. Additionally, the Galaxy Tab 7.7 will launch as a SAFE™ certified device. The SAFE certification signifies that the Tab 7.7 is equipped with an exclusive suite of security features that deliver enterprise-friendly capabilities to help safeguard sensitive data and communications, including Mobile Device Management (MDM), on-device Encryption, Virtual Private Network (VPN) and corporate email, calendar and contacts.