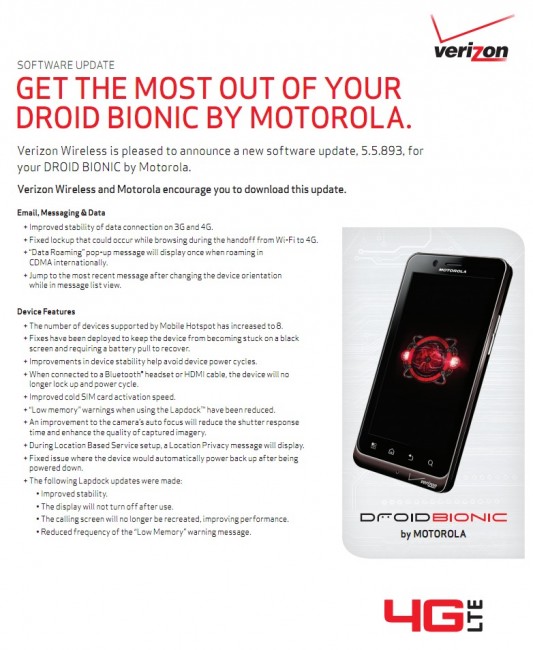 If you are signed up as a member of the Motorola Feedback Network with your DROID Bionic, you may receive notification to update your phone today. The massive bug fixer that was unveiled yesterday is ready to rock and will start to hit the test group within the next few hours. This should be final software, so assuming that all goes well and a major flaw is not discovered during the next few days, you should all be seeing this very soon.

Here is word out of Moto’s camp:

Starting tomorrow (today) at around noon ET, you will get the update pushed to your phone. You will likely see comments on the public forums from owners who receive the update but are not providing feedback here, where we want your input. We will block your ability to post in the public community, but you will get it back in a day or so. And please remember that this project is confidential.

I want to make a few things clear so we don’t have misunderstandings later:
We’re testing final software. A group of some thousands of Droid Bionic owners will receive the software upgrade. Then, we wait for a short period — generally two days but since we’re going into the weekend we’ll get extra time — to see what happens. But only a portion of that group is made up of owners like you, from the Motorola Feedback Network. It’s your feedback that we rely on in evaluting if our software is ready.

Unless there is some extremely serious issue, we will very likely release this software. We have several goals in this effort. First, to make sure something big doesn’t show up with thousands of testers that didn’t show up with dozens and scores. Second, we get a sense of what you like, don’t like, need help with, etc., so we’re prepared for when all the owners are upgraded. And we also capture issues that we may need to address in the future. Certainly if there is anything big, we go back and fix it before we launch. It’s rare, but it’s happened before.

Yep, your Bionic is about to get an overhaul.