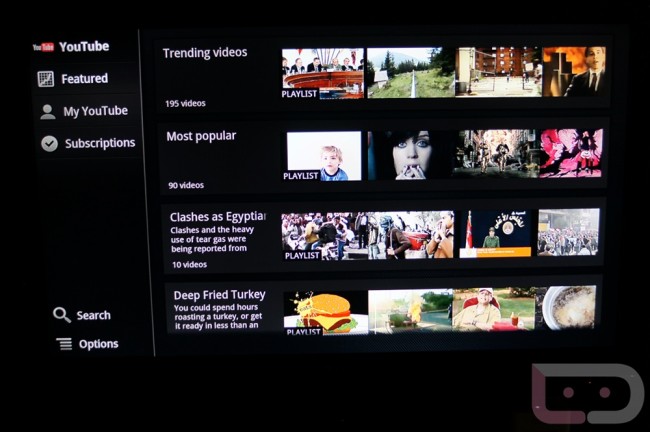 Since Google TV was updated to Honeycomb a couple of weeks back, their team promised to continue to produce updates that would enhance the experience. They appear to be living up to that promise as an update popped onto my Sony GTV box last night, bringing with it new YouTube and Photos apps. If the GTV team can produce new and useful features like this on a monthly basis, they’ll have at least one happy customer.

Seems a little odd that the YouTube app would receive a complete makeover in such a short time, but we’ll take it. In this new version, you get playlists from your couch, subscription management, and the ability to add movies to your own channel.

I’ll admit that I had yet to play with the photo app before this update, so it’s tough to tell if the UI has changed or not. Google is telling us that they added a featured called “Discover” that pulls from your synced photo albums on Picasa and Flickr to create an animated and constantly changing collage. I’ve captured a collage in the making in the photo directly above.

Sorry Logitech Revue owners, still no word on when you will see any of these updates.