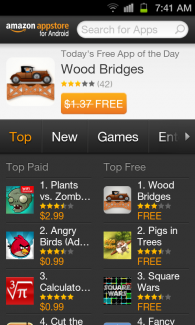 If you have the Amazon Appstore installed, then you were probably prompted late last night or early this morning to update it. This latest build is version 2.0, but more importantly, it matches the theme of the software that will come loaded on next week’s Kindle Fire tablet. It’s all charcoal, grey and black, along with some much needed UI improvements. This no longer looks like some 3rd party market, and instead feels much more like a part of a polished product that Amazon wants you buy on November 15.

So if you haven’t already, open up your Appstore and the update should be waiting for you.

Cheers Stephen, Anish, Kane and everyone else!