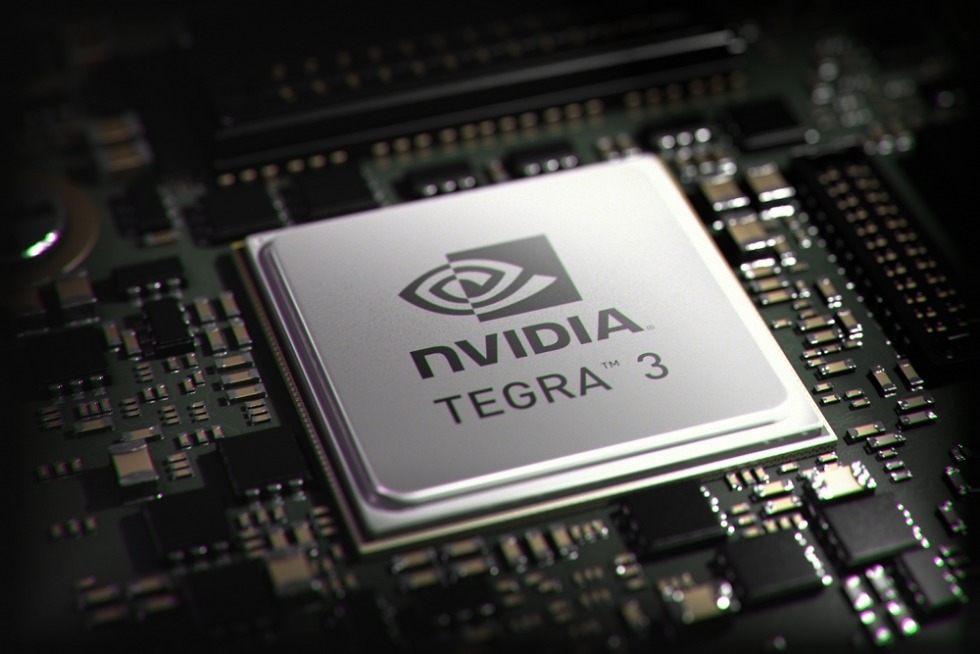 Not only was the Asus Transformer Prime just announced within the last few minutes, but NVIDIA also brought their new quad-core processor out of its codename state. Project Kal-El can now officially be referred to as NVIDIA’s Tegra 3 processor. As the world’s first quad-core chipset for mobile devices, it can deliver up to 5x the performance over their Tegra 2 dual-core processor that was released earlier this year. It combines a PC-class CPU and 3x faster GPU with stereo 3D support to deliver incredible power and a long battery life with less power consumption.

Using the Tegra 3’s new patented Variable SMP architecture, this chipset can switch between four main cores and a fifth lower-power “companion” core to extend battery life and make your tablet perform much more efficiently. For those of you that had concerns about single-charge life, this should allow you to have some faith. It’s obvious that NVIDIA not only focused on power, but they focused equally on how to make devices last longer.

The Tegra 3 will be featured first in the Transformer Prime, but you have to imagine that it will find its way into other tablets before too long. No word yet on when we might see a processor of this magnitude in a phone other than rumors yesterday of the HTC Edge.

To learn everything thing else there is to know about the Tegra 3, you will want to jump past the break. We have videos, comparison photos, and a performance break down. Can you feel the power yet?

Tegra 3 vs. the competition:

Developers from some of the Tegra 3 optimized games share their thoughts:

Remember the Glowball demo from earlier in the year? It’s an official game now:

Known previously by the codename “Project Kal-El,” the Tegra 3 processor provides up to 3x the graphics performance of Tegra 2, and up to 61 percent lower power consumption. This translates into an industry-leading 12 hours of battery life for HD video playback.

The Tegra 3 quad-core CPUs are complemented with a new 12-core NVIDIA GeForce® GPU, which delivers more realism with dynamic lighting, physical effects and high resolution environments, plus support for 3D stereo, giving developers the means to bring the next generation of mobile games to life.

For the millions who play games on mobile devices, the Tegra 3 processor provides an experience comparable to that of a game console. It offers full game-controller support, enabling consumers to play games on their tablet or super phone, or connect to big screen HDTVs for a truly immersive experience. It also leverages NVIDIA’s award-winning 3D Vision technology and automatically converts OpenGL applications to stereo 3D, so consumers can experience 3D on a big screen 3D TV (via HDMI™ 1.4 technology).

The Tegra 3 processor provides the industry’s….

 40 games are expected to be available by the end of 2011, and over 15 Tegra 3 games are under development for Tegra Zone, NVIDIA’s free Android Market app that showcases the best games optimized for the Tegra processor.

 The Tegra 3 processor is in production. Developers can order the Tegra 3 Developer Kit to create applications for devices with Tegra such as tablets and super phones, at developer.nvidia.com/tegra.

 “The Eee Pad Transformer Prime is a category-defining product. Powered by Tegra 3, it launches us into a new era of mobile computing, in which quad-core performance and super energy-efficiency provide capabilities never available before. With Transformer Prime, ASUS has once again led the industry into the next generation.”

 “Tegra 3 is a marvel. Its quad-core CPU, 12-core GeForce GPU and vSMP technology are revolutionary. We worked closely with NVIDIA to build the ultimate tablet – the Eee Pad Transformer Prime – that delivers a magical, uncompromised experience to consumers.”

 “Working with NVIDIA makes the impossible possible. Our Tegra 3 optimized game DaVinci THD will look brilliant when it comes out, with mind-blowing 3D graphics and intuitive touchscreen interface. DaVinci THD will leverage Tegra 3 for its multi-threading capabilities, so we can scale across all four CPU cores and deliver the ultimate console-quality performance. As a result, DaVinci THD will be more realistic, interactive and challenging than anything we’ve done before.”

 “With Tegra 3, NVIDIA has shattered the usual constraints on the quality of mobile device experiences. By enabling tablets and smartphones to operate at an exceptional level, it allows developers like Zen Studios to create console-quality experiences that can be enjoyed anywhere, anytime. The quad-core fueled graphics and physics in Zen Pinball THD are simply incredible and represent the premier mobile pinball experience. You can only get that on devices built on Tegra 3.”

 “Quad-core chips are raising the stakes for mobile gaming. With Tegra 3, we can render even more content with better animations on Bladeslinger THD – all while consuming less power. This is a recipe for all-day game play.”

 “Tegra 3 is making much more complex gaming environments possible on mobile platforms. Gamers are going to be amazed by the level of graphical detail and realistic physics that come through in quad-core enhanced games like Soulcraft THD.”

 “Tegra 3’s quad-core processor and 12-core GPU allows developers to port PC and console game titles using BitSquid Tech for the same great experience on any device. From a hard-core gamer’s customized PC to a phone or tablet with Tegra, you’ll get identical game play and buttery smooth graphics, anywhere any time.”

 “We’re excited to bring the definitive version of Siegecraft to Tegra 3. Its amazing graphics performance and quad-core scaling let us amp up the game to the max – more physics, more units, more Siegecraft!”

 “Thanks to Tegra 3’s fantastic GPU performance we were able to use the same quality textures in Zombie Driver THD as on the PC. The outstanding quad-core CPU performance makes it possible to support Tegra game development in parallel to other high-end platforms.”

 “Mobile gaming is about to take a huge leap forward with Tegra 3. Its GPU gives us access to higher-resolution textures and far better effects. And its four CPUs make Euphoria’s gameplay smoother, more interactive and quality that’s close to a console.”

– Keiichi Yano, Co-Founder and VP of Development at iNiS

 “It’s incredible what Tegra 3’s quad-core architecture bring to mobile gaming. As good as Combat Arms looks on a tablet, it looks 1000 times better when you connect it to your HDTV, strap on game controllers and sit back to enjoy a real 3D console-gaming experience with Combat Arms: Zombies THD.”

 “With the Tegra 3 processor, NVIDIA is once again painting new horizons for technology on wireless platforms. We’re excited to see how the thousands of developers using Unity to create interactive 3D content will take advantage of the extra power that NVIDIA’s quad-core technology provides.”

 “Tegra 3 is equivalent to a console game machine, and we believe devices with it will play an important part in next-generation games. We’ve been working on optimizing our cross-platform engine Chidori to fully support Tegra 3. To support Tegra’s 3 multi-core engine, we’ve optimized our 3D effect tool. And we’ve adapted our high-quality shader library, Aoi, to Tegra 3, allowing truly beautiful imagery.”

 “We’re totally pumped by the potential of Tegra 3’s quad-core CPU and 12-core GPU. They’ll bring console-quality experiences to mobile devices, and we’re working to bring an amazing title to the Tegra platform. Stay tuned for our announcement of a great Tegra 3-optimized title in the coming months.”

 “Tegra 3 is a huge leap forward in mobile computing. Using its quad-core capabilities, we were able to improve all of Sprinkle’s visual effects, plus add a whole new layer of smoke simulation.”

 “We’re floored by everything we’ve seen in Tegra 3. Its four cores, coupled with amazing graphics performance, will let us bring awesome gaming experiences to the Tegra platform next year.”

 “We’ve been developing multimedia applications on Tegra 3 for some time now. The quad-core processing muscle will allow some new apps and use-cases that consumers are going to love.”

– George Tang, General Manager and VP of the Video and Entertainment Group at ArcSoft

 “Seamless, compelling Augmented Reality (AR) experiences demand that all of the pieces of a mobile device work together. Metaio’s AR software requires optimized mobile hardware to make the way we access digital information a more natural experience. Tegra 3 delivers the multi-core CPU performance required for advanced vision processing while bringing a tremendous boost in GPU performance. Working with Tegra’s software stack will make it possible for us to utilize all of those capabilities towards building an Augmented World.”

 “Tegra 3’s combination of HD video playback performance and extended battery life will give Netflix members a fantastic experience as they watch movies and TV episodes streaming from Netflix via their Android devices.”

 “Tegra 3 gives us the horsepower we need to bring a PC-quality photo editing experience to mobile devices through applications like Snapseed, by Nik Software.”

 “By collaborating with NVIDIA, we are able to bring advanced multi-touch and pen capabilities to the tablet market, providing the Android user with a smoother and richer user experience, and enhancing the tablet from a basic consumption device to one that offers more personal and creative capabilities. The processing strength provided by Tegra 3’s additional cores will enable application developers to dedicate CPU cycles to UI processing and provide an enriched pen solution for artistic, enterprise and educational applications.”

 “The tablet and mobile device market are exploding and productivity applications are central to this growth. As the most widely distributed mobile office software, we are excited to partner with NVIDIA to take advantage of the enhanced capabilities inherent in the Tegra 3 quad-core chip to bring continued innovation in the marketplace.”

 “WebGL is being rapidly adopted on HTML5-capable desktop, laptop and netbook systems, and now NVIDIA is helping to bring WebGL to Android. Tegra 3 delivers an incredible level of performance — the four cores provide the multi-threading horsepower needed to drive a complete browser stack including highly interactive 3D.”

 “Tegra already provides the fastest platform for silky smooth magazine reading on Android. The quad-core capabilities of Tegra 3 will help us further accelerate and enhance the complete browsing, downloading and reading experience.”

About NVIDIA NVIDIA (NASDAQ: NVDA) awakened the world to computer graphics when it invented the GPU in 1999. Today, its processors power a broad range of products from smart phones to supercomputers. NVIDIA’s mobile processors are used in cell phones, tablets and auto infotainment systems. PC gamers rely on GPUs to enjoy spectacularly immersive worlds. Professionals use them to create visual effects in movies and design everything from golf clubs to jumbo jets. And researchers utilize GPUs to advance the frontiers of science with high-performance computing. The company holds more than 2,100 patents worldwide, including ones covering ideas essential to modern computing. For more information, see www.nvidia.com.