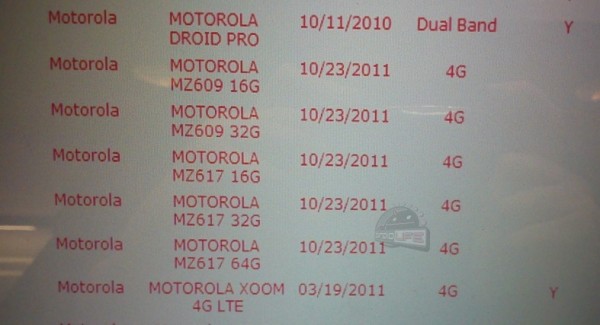 The new Motorola XOOM2 models are starting to pop up everywhere they should be prior to launch. After we gave the world the first pictures, we then saw them in Verizon Cellebrite as the Pasteur (MZ617) and Fleming (MZ609) and are now seeing them in another system with 4G branding and storage size. The MZ617, we have been told is the actual 10.1″ XOOM2. The MZ609 on the other hand is the smaller “media edition” XOOM2 that has also been floating around.

What do you guys think of having a choice of storage up to 64GB on the big dog? 4G is a nice addition, but that also means carrier pricing issues. I think we all know how well that has gone so far – here’s to hoping they offer WiFi-only versions alongside these.