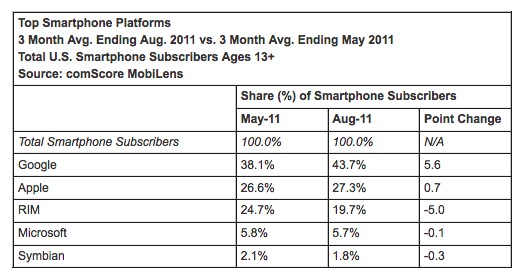 Yesterday the newest ComScore numbers were released with Android continuing to dominate the smartphone market. The green machine has a commanding 43.7 percent of the market with Apple’s iOS coming in second with 27.3 percent. Blackberry maker RIM continues to tumble, ensuring more hard times are ahead for the Waterloo company as they drop to 19.7 percent of market share.

From May to August of this year Android grew 5.7 percent, the largest growth of any mobile operating system. Apple’s iOS was up 0.7 with Blackberry taking a massive loss of negative 5.0 percent.

Hip-hip-hooray for the power of choice and open-source.

In light of Apple’s new iPhone announcement, comScore has also released a report highlighting the implications of this new device to the mobile operator marketplace. A complimentary copy of the report can be downloaded at the following link: http://www.comscore.com/Press_Events/Presentations_Whitepapers/2011/iPhone_5_Implications_for_the_Operator_Industry

84.5 million people in the U.S. owned smartphones during the three months ending in August, up 10 percent from the preceding three month period. Google Android ranked as the top smartphone platform with 43.7 percent market share, up 5.6 percentage points from the prior three-month period. Apple strengthened its #2 position, growing 0.7 percentage points to 27.3 percent of the smartphone market. RIM ranked third with 19.7 percent share, followed by Microsoft (5.7 percent) and Symbian (1.8 percent).