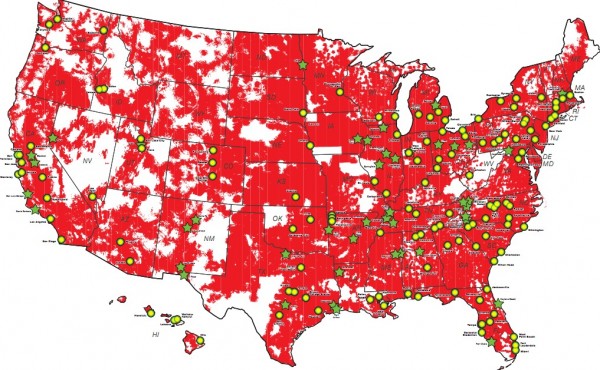 Verizon’s 4G LTE market total will reach 143 when they turn on another 26 and expand in others tomorrow morning.  The teasing of this new batch of cities started back in August, with many of them going live well before they were scheduled to.  By covering more than 160 million Americans – I’d say Big Red is well on its way to covering the entire nation by the end of 2013.

Seeing LTE yet?  Wouldn’t doubt it if you were.

BASKING RIDGE, N.J. – Verizon Wireless is turning on the world’s most advanced wireless network in 26 additional cities and expanding its network in San Francisco, Indianapolis and Cleveland/Akron on Thursday, Sept. 15, bringing the blazingly fast speed of 4G Long Term Evolution (LTE) to a total of 143 markets across the United States. Consumers and businesses can choose from 11 4G LTE-enabled devices to connect to the fastest 4G LTE network in the country, including the new DROID BIONIC™ by Motorola which is the first Verizon Wireless smartphone to combine 4G LTE with the power of dual-core 1 GHz processors, 1 GB of RAM and a stunning 4.3-inch qHD display.

“We’ve followed an aggressive roll out plan for our 4G LTE network, and consumers and businesses can connect today to the fastest 4G LTE network in the country with nearly a dozen devices,” said David Small, chief technical officer of Verizon Wireless. “Speed matters, and it matters when you’re in your hometown as well as when you’re on the road. That’s why it’s important that you can connect over 4G LTE in 143 markets, from New York to San Francisco, and from Miami to Las Vegas.”

Consumers can choose from 11 devices to access the blazingly fast speeds of the 4G LTE network, including:
· Smartphones: DROID BIONIC by Motorola, Revolution™ by LG, DROID Charge by Samsung and ThunderBolt™ by HTC

In real-world, fully loaded network environments, 4G LTE users should experience average data rates of 5 to 12 megabits per second (Mbps) on the downlink and 2 to 5 Mbps on the uplink.

When customers travel outside of a 4G LTE coverage area, the devices automatically connect to Verizon Wireless’ 3G network, enabling customers to stay connected from coast to coast. Verizon Wireless’ 3G network is the most reliable network in the country and allows customers in 3G coverage areas today who purchase 4G LTE devices to take advantage of 4G LTE speeds when the faster network becomes available in their areas.

Reliability: In and Beyond Major Cities

As the first wireless company in the world to broadly deploy 4G LTE technology, Verizon Wireless is committed to building its 4G LTE network with the same performance and reliability for which it has long been recognized. Verizon Wireless’ consistent focus on reliability is based on rigid engineering standards and a disciplined deployment approach year after year. The company’s 700 MHz spectrum gives Verizon Wireless specific advantages with 4G LTE, including a contiguous, nationwide network license.