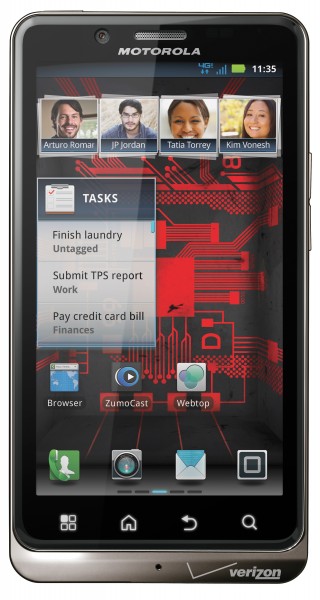 We first saw a phone that went by the name of DROID Bionic almost 9 months ago to the day back at CES in Las Vegas and were told then that it was “the end of waiting.”  Since then, we have gone through a series of questions on why it wasn’t initially equal in power to its cousin over at AT&T followed by a decision to delay the phone we saw in favor of a new model.  This new model would be known internally as the Targa, and was created to try and compete with the upcoming super phones from other manufacturers – something its predecessor certainly could not do.  So after months of delays, speculation, and leaks, we are finally here.  Verizon has unleashed the beast (well, tomorrow they will) to the world for $299 on 2-year contract or somewhere around $589 without one.

Can it “rule all machines”?  Can its upgraded parts compete with the super phones that are expected to launch in the very near future?  Is it overhyped or are the haters clueless?  I guess we’ll soon find out when the masses flock to pick it up in 1 short day.

There is not a pre-order as Verizon is likely hoping to build up buzz by having customers head into stores for a change.  We still are not sure if there will be lines, but locations selling the phone should be busier than normal as the marketing machine will be revving its engines.

There are zero surprises, which isn’t necessarily a bad thing – we have just seen this thing leak more times than almost any phone known to man.  It’s a 1GHz dual-core OMAP processor, 4.3″ qHD display, 1GB RAM, Android 2.3.4, front and rear cameras, and of course, 4G LTE.  We have heard nothing but positive things from the lucky few that have had their hands on it since devices arrived in stores last week.  Our own testing will take place soon enough.

So, are you ready for it or just glad that the “end of waiting” is finally over with?

Unsurpassed Power, Speed and Entertainment On the Fastest, Most Advanced 4G LTE Network in America

DROID BIONIC is the first Verizon Wireless smartphone to combine 4G LTE with the power of dual-core 1 GHz processors, 1 GB of RAM and a stunning 4.3-inch qHD display – all in a sleek form factor that makes it the thinnest 4G LTE smartphone from Verizon Wireless.  Customers can expect to fly across the Web on the Verizon Wireless 4G LTE network with download speeds of 5 to 12 Mbps and upload speeds of 2 to 5 Mbps in 4G LTE mobile broadband coverage areas.

DROID BIONIC introduces a host of groundbreaking applications and accessories that turn the device into a multimedia hub, a ruler of remote access and a purveyor of virtuality.   DROID BIONIC introduces ZumoCast™ by Motorola, an application that lets customers bring their digital world of videos, music, pictures and documents stored on their computers to their handset via remote access.  With its revolutionary Webtop application, DROID BIONIC can beam a full-featured Firefox® Web browser 4.0, email or documents to a TV or monitor, like the separately purchased Lapdock™ with a 11.6” screen, keyboard and integrated trackpad.

Accessories such as the HD Station let DROID BIONIC users turn the phone into an entertainment center or home office.  Customers can view pictures, video, and content from the DROID BIONIC on any HDTV or monitor by connecting a separately sold HDMI cable.  They can also take a conference call while editing documents and surfing the Web.  And, of course, the DROID BIONIC lets customers share their 4G LTE signal with up to five Wi-Fi-enabled devices when they activate the Verizon Wireless Mobile Hotspot.  The device of the future today, the DROID BIONIC also includes the following features:

MOTOROLA and the Stylized M Logo are registered trademarks of Motorola Trademark Holdings, LLC.  Android is a trademark of Google, Inc.  Adobe and Adobe Flash are either registered trademarks or trademarks of Adobe Systems Incorporated in the United States and/or other countries. Citrix is a trademark of Citrix Systems, Inc. and/or one or more of its subsidiaries, and may be registered in the U.S. Patent and Trademark Office and in other countries.  All other trademarks are the property of their respective owners.   © 2011 Motorola Mobility, Inc. All rights reserved.