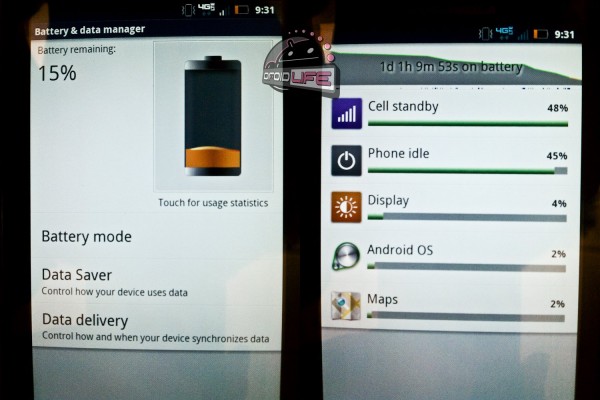 One of the selling points for the DROID Bionic when it is finally released, is likely going to be that it has an above average battery life as compared to other 4G LTE phones like the Thunderbolt.  We aren’t exactly sure what Moto has done on the inside to hopefully extend the life of the device, but one would guess that they have done more than just slap an extended battery in it, since they have had months and months of extra time for optimization.  Thanks to a DL reader, we have shots of the Bionic’s battery meter at the 60%, 50% and 15% marks to give us some sort of an idea of what we can expect.

What we have been told, is that up until the 60% mark, the device was essentially just running on 3G with moderate usage, allowing it to cruise through almost 15 hours without dropping much.

After the device hit 60% though, the phone jumped between 3G and 4G LTE for a while before locking onto just 4G LTE for the remainder of its charge.  As you can see in the screenshot below, with what appears to be pretty moderate usage, the device still stood at around 50% after over 19 hours of use.

And finally, we return back to the photo up top which shows that after over a full day (25 hours) of what we are still pretty sure has been moderate usage, the phone has 15% left.

We can gather a few things from looking at these shots.  First, is that this phone already crushes the HTC Thunderbolt in battery even if it has just been sitting idle.  The Thunderbolt, whether it was on 3G or 4G, could not last a day even at moderate usage.  Second thing, is it appears as if this new Blur still heavily favors cell standby time and phone idle in its battery meters just like it does on the DROID3.  Even with pretty heavy use, my D3 almost always has these two as its top battery gobblers, so it’s pretty tough to tell how much usage this phone was getting on this charge.  We did hear from our source that by no means, was this “heavy” usage.

Overall though, this is a pretty good sign for the Bionic, especially with doubters expecting the battery to die in minutes with both LTE and a dual-core processor running.  It’s looking like with all that extra time that Moto put into this device, that they may have actually found some ways to keep it alive longer.