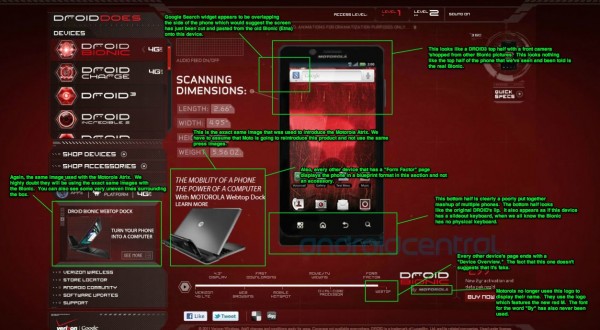 I’m sure you have seen this image of the DROID Bionic that apparently showed up on DroidDoes.com, since well, it’s been everywhere over the last few hours.  We hate to break it to you though, but this thing looks about as fake as the Real Housewives and Heidi Montag combined.

We’ve put together some of our thoughts over top of this image, that we suggest you look at.  Basically what we are saying, is unless this is from the actual DroidDoes.com web designer and he is just testing out a layout which includes old pictures of Atrix docks and a mashup of 3 or 4 or 5 different phones that aren’t actually the Bionic, then we have no reason to believe this is legit.

I will give it one thing – $299 is probably the price you will see.

And to give you another look at the DROID Bionic that we are actually expecting next month compared to the one included in this ‘shop job, we’ve put them side-by-side in a comparison shot below.  You guys tell us what you think…