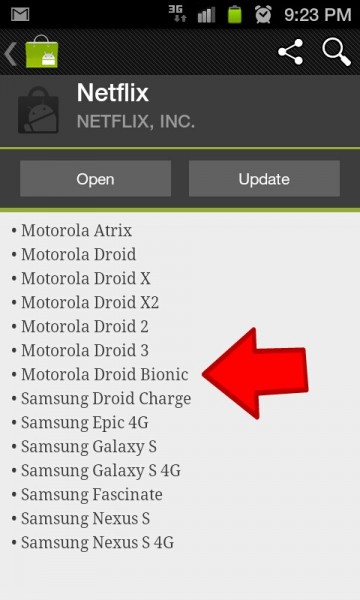 We just wanted to reach out to Netflix and thank them for adding support to the one device we’ve been waiting all of 2011 for.  With it’s enormous 4.3″ screen, dual-core processor, 1GB of RAM, and 4G LTE support, the DROID Bionic will make the perfect device to stream all of your addicting content from.  You just made Verizon’s most anticipated device ever, that much more attractive.  Thank you again, Netflix.

Oh, they added support for the DROID Charge and HTC Thunderbolt as well.  Yay.

Update:  As reader FragDroidX has pointed out, Netflix has now removed the DROID Bionic from the list:

*Note – the Bionic may be the “most anticipated” ever, but the Galaxy S II was just announced for the U.S.…yep.