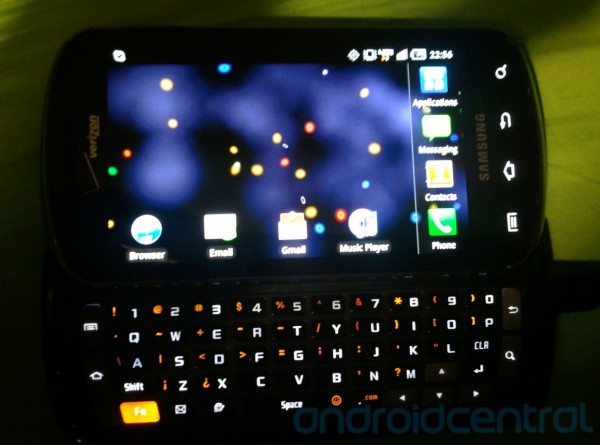 “Please, oh please don’t let it happen,” is all I can seem to tell myself after seeing the latest photos of a Samsung slider that appears to be headed for Verizon’s 4G LTE network.  And what I mean by that is, please do not let this be VZW’s version of the Samsung Galaxy S II.  I understand that there will always be a place for phones with a full keyboard, just don’t let it be what we currently have as our top phone of all time.

Actually, we’re pretty sure (at least assuming) this device won’t be anywhere near the specs of a Galaxy S II and will likely be more of a keyboarded Fascinate (or like the Epic 4G) than anything.  So far Verizon has only released 4G LTE phones that were essentially built with last year’s tech, so it makes sense to assume that this one will also fall into that category.  All signs on our end are pointing towards the DROID Bionic being their first real LTE beast (dual-core, 1GB of RAM, etc.) that will be backed by a massive marketing campaign.  My guess, is that this phone will be their late July or early August 4G LTE filler while they prepare the world for the release of the Bionic (which may not drop until 9/1).

Oh, you can tell that this phone is running an old version of TouchWiz and not the one seen on the SGS2.  That Messaging icon and the shaded home dock are dead giveaways.  This specific phone also happens to be sporting a 5MP rear camera (SGS2 has 8MP) and a 1.3MP front cam (2MP on the SGS2).  So yeah, this isn’t looking at all like some mysterious dual-core slider beast from Samsung, but instead, just another rehash from 2010.

This device first popped up a couple of weeks ago and is now clearly in the hands of testers – we could be seeing it very soon.