Tomorrow is July 7, and that means that you will need to be on an unlimited smartphone data plan by the end of today or else you will be subject to Verizon’s new tiered data plans.  It’s been almost two weeks since we broke news on these new tiers and have talked about it at nauseating levels, but we still wanted to give you one last reminder.  We’ve put together a summary of Big Red’s new tiers below.

First off, here are the official tiers that we pulled straight from Verizon’s site: 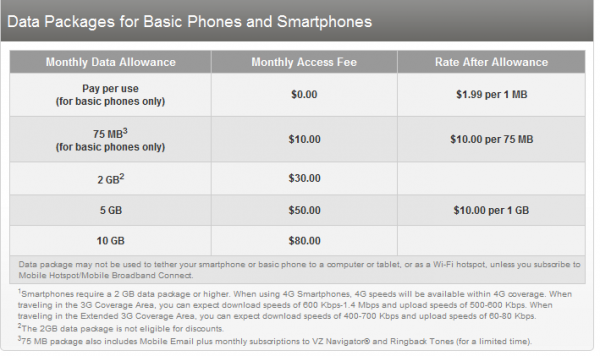 Who will be affected by new data tiers?

Are there different plans for 3G and 4G customers?

No, Verizon is looking at 3G and 4G data plans as being one and the same  Whether you buy a 3G or 4G smartphone starting July 7, you’ll see just one set of tiers – the one we have pictured above.

I have smartphone data now, but want to upgrade to the Bionic – can I keep my unlimited data?

According to multiple Verizon documents, as well as our sources, current unlimited smartphone customers can upgrade after tiers are implemented and still keep unlimited data (as long as they are currently on a smartphone plan).  We aren’t sure how long or how many times that Verizon will allow users to upgrade without switching over to tiers, but “at this time” they are letting it slide.

I have 3G service now, but want 4G later – can I keep unlimited data?

Yes.  According to two of our reports and Verizon’s support, as long as you are locked into unlimited smartphone data before July 7, you can upgrade to a 4G device later and not be moved to tiers.  We have no idea how long they will let this happen, but all signs point to it being for a while.

How do I know which tier to choose?

Verizon has a data calculator that can help you decide.

I have a feature phone now, should I lock into unlimited data now?

Yes.  If you don’t upgrade to an unlimited smartphone data package now and decide to after July 7, you’ll have to choose a tier.  Basically what that means, is that you’ll need to run out a buy a smartphone today to keep unlimited.  Remember that there is a 14-day return policy at Verizon, so you could buy something today and return it tomorrow for the DROID3.

Everyone all set?  Tiers are officially here tomorrow.

You can find all of our coverage on tiered data here.