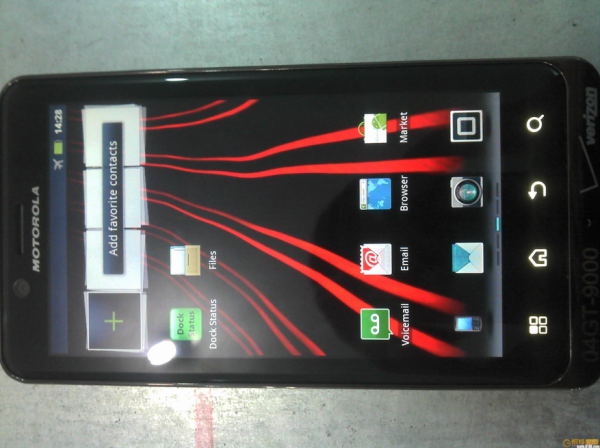 Yesterday’s news was all about the DROID3 and those 3 tutorial videos that it popped up in – today, it might become DROID Bionic leak day.  Are these the first real (non-render) pictures of the phone?  It sure appears that way.

You’ve all heard of this device by now after cancellation rumors which were followed up by a confirmation of delay from Motorola.  The phone itself has been the most anticipated phone on Verizon or really any carrier that I can remember over the last year and rightfully so.  What we do know is that it’ll sport a dual-core processor (likely an OMAP now), 4G LTE, front camera and qHD screen, but since it has been pushed back to undergo “enhancements” we don’t know much else.  Unless of course these pictures are of a real Bionic and then we can gather at least a couple of additional specs.

We’re seeing a definite front facing camera, new version of Blur (new icons and contact widget), an 8MP camera on the back (1080p recording), web-top capabilities, two separate speakers on the back, and a 4G LTE radio that should make everyone happy.  If this is indeed the Bionic, sign me up now.

There are two odd things here that we were expecting to see and wanted to toss them out while we dig for further confirmation on whether or not this really is the new Bionic.  We had heard a month or two back that it would include a hump as seen on the DROIDX, but with sleeker styling – this phone doesn’t appear to have a hump.  We were also told that it would sport a 12MP camera and this only has an 8MP.  It’s a sexy device, but we’re not ready to bet the world on this being it.

The backside of the device:

A comparison to the previously leaked render of the device:

Closer look at that new 8MP shooter that can record 1080p video: