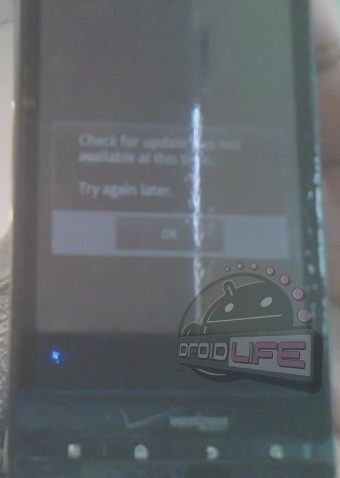 Last week we were tipped to the possibility of the official Gingerbread (Android 2.3) update being approved and then released to the DROIDX by May 13th.  Word on the likely hood of that happening was sort of confirmed a few days later, and now that we’re seeing funny things happen in the System Updates page of the DX, we’re wondering if we aren’t finally there.

Now, I know the picture above is tough to read, but normally when you head in to check for a system update on your phone, it’ll simply tell you that you are up-to-date and that nothing is available.  Well as of last night, the DROIDX started in with the message above which reads “”Check for update was not available at this time. Try again later.”  Is that a sign that the update is being prepped for Moto servers?  Something similar happened back around the Froyo update, so we’ll continue to monitor this.