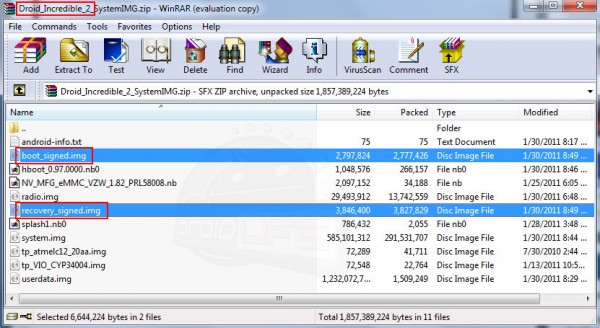 The big controversy surrounding the HTC Thunderbolt last weekend had to do with its locked down bootloader and signed recovery, which temporarily scared the hell out of anyone who just bought it.  Luckily for all of us, the crew at AndIRC quickly jumped on it and cracked it wide open before Verizon had a record number of opening day returns on their hands.

The really scary thing here though, is not that it was the Thunderbolt that was locked, but that it was HTC doing the dirty work.  Previously, HTC had been known as a “dev” friendly phone manufacturer, so when we saw a bunch of signed pieces on this new 4G LTE phone, we all freaked.  But what if they weren’t stopping there?

The crew over at Android Police took a look at an RUU from the Incredible S and discovered that it could also be just as locked down.

Well, after seeing their report, our thoughts immediately jumped over to the DROID Incredible 2, which could be here any day and will actually affect many of you.  We opened up the system image that was leaked out a couple of weeks ago and found what appears to be the exact same news that AP ran into with the IncS.  Now, we have no way of proving if it’s officially locked just by looking at a system image, but seeing the words “signed” all over the place sure isn’t leading us to believe it won’t be.

Who’s to blame in all of this?  We’ve been hearing for months now that carriers are starting to place more and more stress on manufacturers to find ways to keep users like you and I out.  So with HTC seemingly jumping on board with the likes of Motorola, our days of a truly open handset could be numbered.  Maybe our friendly neighborhood Panda will find us a Nexus S 4G LTE to grab a hold of?