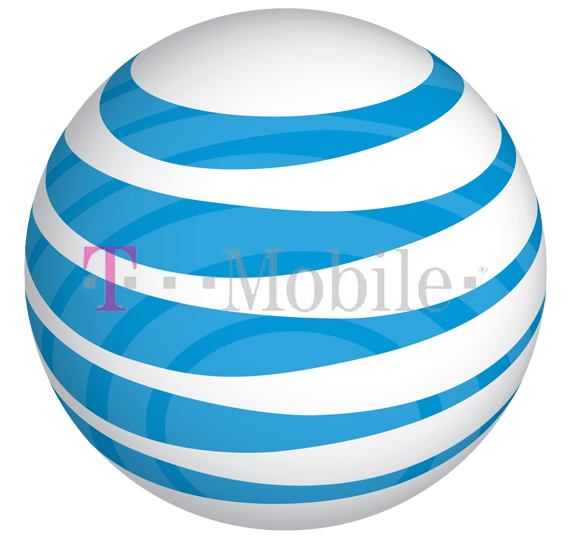 After what was otherwise a slow weekend, a major bombshell has dropped in American telecom news: AT&T and Deutche Telekom has just entered into an agreement that arranges the purchase of T-Mobile USA for a stunning $39 billion. AT&T’s combined user base will swell to approximately 130 million users after the requisite bureaucracy time, which is estimated to take one year.

Enhances network capacity, output and quality in near term for both companies’ customers

AT&T commits to expand 4G LTE deployment to an additional 46.5 million Americans, including in rural, smaller communities, for a total of 294 million or 95% of the U.S. population

DALLAS, TEXAS AND BONN, GERMANY — March 20, 2011— AT&T Inc. (NYSE: T) and Deutsche Telekom AG (FWB: DTE) today announced that they have entered into a definitive agreement under which AT&T will acquire T-Mobile USA from Deutsche Telekom in a cash-and-stock transaction currently valued at approximately $39 billion. The agreement has been approved by the Boards of Directors of both companies.

AT&T’s acquisition of T-Mobile USA provides an optimal combination of network assets to add capacity sooner than any alternative, and it provides an opportunity to improve network quality in the near term for both companies’ customers. In addition, it provides a fast, efficient and certain solution to the impending exhaustion of wireless spectrum in some markets, which limits both companies’ ability to meet the ongoing explosive demand for mobile broadband.

With this transaction, AT&T commits to a significant expansion of robust 4G LTE (Long Term Evolution) deployment to 95 percent of the U.S. population to reach an additional 46.5 million Americans beyond current plans – including rural communities and small towns. This helps achieve the Federal Communications Commission (FCC) and President Obama’s goals to connect “every part of America to the digital age.” T-Mobile USA does not have a clear path to delivering LTE.

“This transaction represents a major commitment to strengthen and expand critical infrastructure for our nation’s future,” said Randall Stephenson, AT&T Chairman and CEO. “It will improve network quality, and it will bring advanced LTE capabilities to more than 294 million people. Mobile broadband networks drive economic opportunity everywhere, and they enable the expanding high-tech ecosystem that includes device makers, cloud and content providers, app developers, customers, and more. During the past few years, America’s high-tech industry has delivered innovation at unprecedented speed, and this combination will accelerate its continued growth.”

Stephenson continued, “This transaction delivers significant customer, shareowner and public benefits that are available at this level only from the combination of these two companies with complementary network technologies, spectrum positions and operations. We are confident in our ability to execute a seamless integration, and with additional spectrum and network capabilities, we can better meet our customers’ current demands, build for the future and help achieve the President’s goals for a high-speed, wirelessly connected America.”

Deutsche Telekom Chairman and CEO René Obermann said, “After evaluating strategic options for T-Mobile USA, I am confident that AT&T is the best partner for our customers, shareholders and the mobile broadband ecosystem. Our common network technology makes this a logical combination and provides an efficient path to gaining the spectrum and network assets needed to provide T-Mobile customers with 4G LTE and the best devices. Also, the transaction returns significant value to Deutsche Telekom shareholders and allows us to retain exposure to the U.S. market.”

As part of the transaction, Deutsche Telekom will receive an equity stake in AT&T that, based on the terms of the agreement, would give Deutsche Telekom an ownership interest in AT&T of approximately 8 percent. A Deutsche Telekom representative will join the AT&T Board of Directors.

Competition and Pricing
The U.S. wireless industry is one of the most fiercely competitive markets in the world and will remain so after this deal. The U.S. is one of the few countries in the world where a large majority of consumers can choose from five or more wireless providers in their local market. For example, in 18 of the top 20 U.S. local markets, there are five or more providers. Local market competition is escalating among larger carriers, low-cost carriers and several regional wireless players with nationwide service plans. This intense competition is only increasing with the build-out of new 4G networks and the emergence of new market entrants.

The competitiveness of the market has directly benefited consumers. A 2010 report from the U.S. General Accounting Office (GAO) states the overall average price (adjusted for inflation) for wireless services declined 50 percent from 1999 to 2009, during a period which saw five major wireless mergers.

Addresses wireless spectrum challenges facing AT&T, T-Mobile USA, their customers, and U.S. policymakers
This transaction quickly provides the spectrum and network efficiencies necessary for AT&T to address impending spectrum exhaust in key markets driven by the exponential growth in mobile broadband traffic on its network. AT&T’s mobile data traffic grew 8,000 percent over the past four years and by 2015 it is expected to be eight to 10 times what it was in 2010. Put another way, all of the mobile traffic volume AT&T carried during 2010 is estimated to be carried in just the first six to seven weeks of 2015. Because AT&T has led the U.S. in smartphones, tablets and e-readers – and as a result, mobile broadband – it requires additional spectrum before new spectrum will become available. In the long term, the entire industry will need additional spectrum to address the explosive growth in demand for mobile broadband.

Improves service quality for U.S. wireless customers
AT&T and T-Mobile USA customers will see service improvements – including improved voice quality – as a result of additional spectrum, increased cell tower density and broader network infrastructure. At closing, AT&T will immediately gain cell sites equivalent to what would have taken on average five years to build without the transaction, and double that in some markets. The combination will increase AT&T’s network density by approximately 30 percent in some of its most populated areas, while avoiding the need to construct additional cell towers. This transaction will increase spectrum efficiency to increase capacity and output, which not only improves service, but is also the best way to ensure competitive prices and services in a market where demand is extremely high and spectrum is in short supply.

Expands 4G LTE deployment to 95 percent of U.S. population – urban and rural areas
This transaction will directly benefit an additional 46.5 million Americans – equivalent to the combined populations of the states of New York and Texas – who will, as a result of this combination, have access to AT&T’s latest 4G LTE technology. In terms of area covered, the transaction enables 4G LTE deployment to an additional 1.2 million square miles, equivalent to 4.5 times the size of the state of Texas. Rural and smaller communities will substantially benefit from the expansion of 4G LTE deployment, increasing the competitiveness of the businesses and entrepreneurs in these areas.

Increases AT&T’s investment in the U.S.
The acquisition will increase AT&T’s infrastructure investment in the U.S. by more than $8 billion over seven years. Expansion of AT&T’s 4G LTE network is an important foundation for the next wave of innovation and growth in mobile broadband, ensuring the U.S. continues to lead the world in wireless technology and availability. It makes T-Mobile USA, currently a German-owned U.S. telecom network, part of a U.S.-based company.

An impressive, combined workforce
Bringing AT&T and T-Mobile USA together will create an impressive workforce that is best positioned to compete in today’s global economy. Post-closing, AT&T intends to tap into the significant knowledge and expertise held by employees of both AT&T and T-Mobile USA to succeed. AT&T is the only major U.S. wireless company with a union workforce, offering leading wages, benefits, training and development for employees. The combined company will continue to have a strong employee and operations base in the Seattle area.

Consistent with AT&T’s track record of value-enhancing acquisitions
AT&T has a strong track record of executing value-enhancing acquisitions and expects to create substantial value for shareholders through large, straightforward synergies with a run rate of more than $3 billion, three years after closing onward (excluding integration costs). The value of the synergies is expected to exceed the purchase price of $39 billion. Revenue synergies come from opportunities to increase smartphone penetration and data average revenue per user, with cost savings coming from network efficiencies, subscriber and support savings, reduced churn and avoided capital and spectrum expenditures.

The transaction will enhance margin potential and improve the company’s long-term revenue growth potential as it benefits from a more robust mobile broadband platform for new services.

Additional financial information
The $39 billion purchase price will include a cash payment of $25 billion with the balance to be paid using AT&T common stock, subject to adjustment. AT&T has the right to increase the cash portion of the purchase price by up to $4.2 billion with a corresponding reduction in the stock component, so long as Deutsche Telekom receives at least a 5 percent equity ownership interest in AT&T.

The number of AT&T shares issued will be based on the AT&T share price during the 30-day period prior to closing, subject to a 7.5 percent collar; there is a one-year lock-up period during which Deutsche Telekom cannot sell shares.

The cash portion of the purchase price will be financed with new debt and cash on AT&T’s balance sheet. AT&T has an 18-month commitment for a one-year unsecured bridge term facility underwritten by J.P. Morgan for $20 billion. AT&T assumes no debt from T-Mobile USA or Deutsche Telekom and continues to have a strong balance sheet.

The transaction is expected to be earnings (excluding non-cash amortization and integration costs) accretive in the third year after closing. Pro-forma for 2010, this transaction increases AT&T’s total wireless revenues from $58.5 billion to nearly $80 billion, and increases the percentage of AT&T’s total revenues from wireless, wireline data and managed services to approximately 80 percent.

This transaction will allow for sufficient cash flow to support AT&T’s dividend. AT&T has increased its dividend for 27 consecutive years, a matter decided by AT&T’s Board of Directors.

Conditions
The acquisition is subject to regulatory approvals, a reverse breakup fee in certain circumstances, and other customary regulatory and other closing conditions. The transaction is expected to close in approximately 12 months.

Conference Call/Webcast
On Monday, March 21, 2011, at 8 a.m. ET, AT&T Inc. will host a live video and audio webcast presentation regarding its announcement to acquire T-Mobile USA. Links to the webcast and accompanying documents will be available on AT&T’s Investor Relations website. Please log in 15 minutes ahead of time to test your browser and register for the call.

Transaction Website
For more information on the transaction, including background information and factsheets, visit www.MobilizeEverything.com.