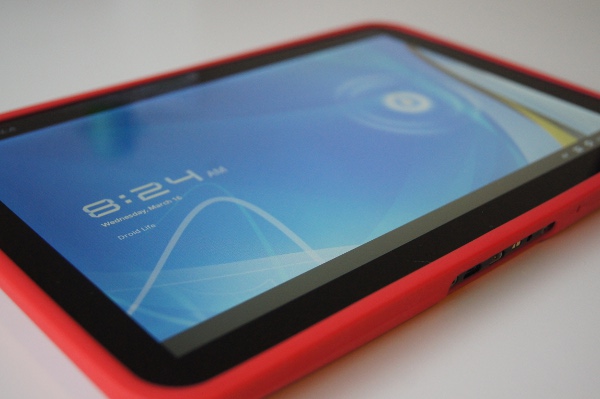 Finally, right?  After almost a month with the device, we’re ready to put together our thoughts on the Motorola XOOM, the world’s first Honeycomb tablet.  This tablet deserved a lot more than those quickie 2-day press reviews we saw around launch time, especially since it introduced the world to a new tablet operating system.  Or should I say, the only tablet operating system?  We didn’t want this to come off as one of those barely-there overviews, so instead, we took our sweet time with it.  We really wanted to blend the XOOM into our every day lives and see if it could keep up.  Did it?  Let’s find out.

Gaming on the XOOM:

The hardest part of this review…should you buy one or not?  There really is no straight forward answer for that.  Is this one hell of a powerful device that I’ve enjoyed every second of?  Yes.  Does it accomplish everything that I expected it to?  Yep.  Has it replaced my laptop at times?  Definitely.  Will it continue to be a part of my everyday life for the foreseeable future?  Indeed it will.  But is it annoying that I paid $799 for a device that isn’t finished?  You betcha.

The tablet world is an odd one.  This really is a “luxury” item.  It’s not like anyone really needs a tablet, but I’m not going to lie; it sure is nice to have one handy when you are traveling or even just relaxing at home away from your office.  With the XOOM, you get a solid product, but it’s also one that isn’t 100% done yet.  So as a “luxury” item, it’s sort of hard for me to scream “Go get one now!”  We’re still waiting for Flash (which will be here Friday), we’re waiting for 4G LTE, and we’re waiting for SD card storage.  We’re also waiting for Honeycomb to really hit its stride and show us all exactly what it can do.

I don’t want to say that the XOOM and Honeycomb together are a half-baked or beta product like many others have said, but it’s definitely one that early adopters will love and novice users may get frustrated with at times.  It’s the first attempt in a long line of products.  If you are expecting it to be perfect out of the gate, you might be disappointed.  If you are expecting to watch the product evolve and get better and better over its first few months, then you will definitely enjoy it.