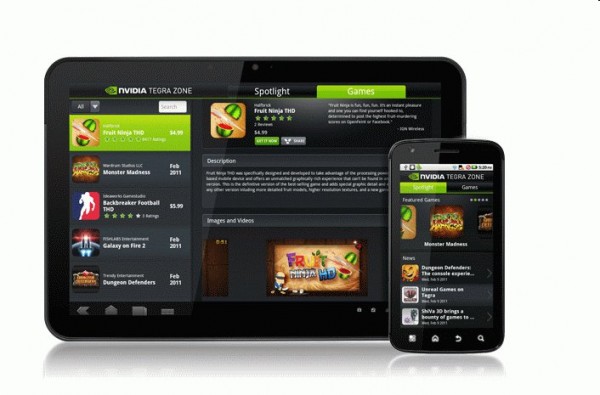 Recently purchased a Motorola XOOM, but aren’t exactly sure which games you want to start crushing on with that ridiculously powerful Tegra 2 chip?  Don’t worry, NVIDIA has you covered with their new app called, TEGRA ZONE.  The app has one purpose, and that’s to  get you in touch with not only the best games on the Android Market, but the ones that can fully utilize all that the Tegra 2 has to offer.  When you think of a market that highlights only the best stuff in an amazingly clear way, this is exactly what you probably envisioned.

The app is free to download, brings you reviews and comments, highlights news related to Tegra 2 gaming and most importantly, redirects you back to the original market to finalize your purchases.  This is the way app markets should be implemented.

Full release, list of games and a bunch of pics after the break.

SANTA CLARA, CA — (Marketwire) — 03/01/2011 — NVIDIAannounced today that the Tegra Zone™ app is now live on the Android Market, providing a one-stop destination for consumers seeking the richest games for their super phone or tablet powered by the NVIDIA® Tegra™ 2 mobile super chip.

Games on Tegra Zone apps are especially enhanced for Tegra 2 super chip-powered devices, and are more realistic and interactive. Among those selected as launch titles are Dungeon Defenders: First Wave Deluxe HD, the first game available for Android that’s built on Unreal Engine 3; Samurai II: Vengeance; and Galaxy on Fire 2 THD. A complete list is provided below.

Introduced over the past several months in a variety of super phones and tablets, the Tegra 2 super chip is finding a growing market, particularly among those interested in console-quality gaming on their mobile device. It is built with the world’s first mobile dual-core CPU — which unleashes the best Web experience, with up two-times faster browsing and support for full Adobe® Flash® Player hardware GPU acceleration, plus unprecedented multitasking capabilities. It also includes an NVIDIA GeForce® GPU — which provides stunningly rich visual experiences and console-quality gaming.

NVIDIA has worked closely with game developers to enhance games for the Tegra 2 super chip, bringing such features as:

NVIDIA (NASDAQ: NVDA) awakened the world to the power of computer graphics when it invented the GPU in 1999. Since then, it has consistently set new standards in visual computing with breathtaking, interactive graphics available on devices ranging from tablets and portable media players to notebooks and workstations. NVIDIA’s expertise in programmable GPUs has led to breakthroughs in parallel processing which make supercomputing inexpensive and widely accessible. The Company holds more than 1,700 patents worldwide, including ones covering designs and insights that are essential to modern computing. For more information, see www.nvidia.com.

Certain statements in this press release including, but not limited to statements as to: the benefits, features and impact of the Tegra processor, Tegra Zone and NVIDIA GPUs; the market for Tegra 2 super chips; and the effects of the company’s patents on modern computing are forward-looking statements that are subject to risks and uncertainties that could cause results to be materially different than expectations. Important factors that could cause actual results to differ materially include: global economic conditions; our reliance on third parties to manufacture, assemble, package and test our products; the impact of technological development and competition; development of faster or more efficient technology; design, manufacturing or software defects; changes in consumer preferences or demands; changes in industry standards and interfaces; unexpected loss of performance of our products or technologies when integrated into systems; as well as other factors detailed from time to time in the reports NVIDIA files with the Securities and Exchange Commission, or SEC, including its Form 10-Q for the fiscal period ended October 31, 2010. Copies of reports filed with the SEC are posted on the company’s website and are available from NVIDIA without charge. These forward-looking statements are not guarantees of future performance and speak only as of the date hereof, and, except as required by law, NVIDIA disclaims any obligation to update these forward-looking statements to reflect future events or circumstances.

© 2011 NVIDIA Corporation. All rights reserved. NVIDIA and the NVIDIA logo, GeForce, PhysX and Tegra are trademarks and/or registered trademarks of NVIDIA Corporation in the U.S. and other countries. Other company and product names may be trademarks of the respective companies with which they are associated. Features, pricing, availability, and specifications are subject to change without notice.