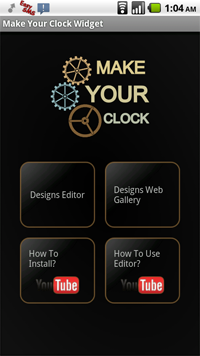 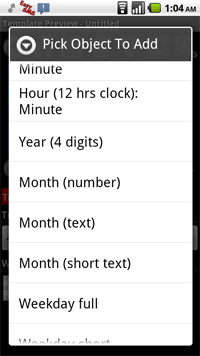 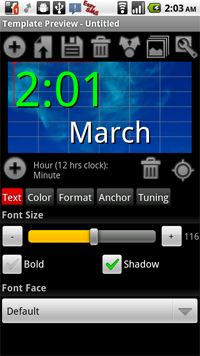 We feature a lot of widget posts here on Droid Life; we believe that part of what makes Android so amazing is the ability to customize your home screen however you want. Sometimes, though, what someone’s thrown together isn’t enough; you need something a little bit more personal.

Make Your Clock Widget is an application currently in beta that allows you to do just that. At face value, it’s a very simple do-it-yourself app; from its menus, you can choose different elements of date and time, change their color, add a drop shadow, mess with layering and size, and generally muck about until you create something you’re happy with. This is great for fickle types like myself, who need to have things exactly so.

Once a clock widget is finished, users will give it a name and save it. They can then share it with friends or allow it to be listed inside the app itself (requires an account sign-up.) Each app shows up under the “Make Your Clock Widget” section of the Android widget select menu, and can be set up to open an application upon clicking: I use mine as a really quick calendar reference tool.

Make Your Clock Widget does what it says on the label, and does it well. The app just works, and the only hiccups I had (involving selecting small objects with my fingertip) was ratified by a “list all elements” button, which allows layer selection. Users who want to take a look at a tutorial of how the app works can look at the video below; the developer himself gives a little run-through of all its features.

On a deeper level, though, Make Your Clock Widget is kind of like the Little Big Planet video game franchise: sure, you can spend five minutes to make a simple platforming level, but when you actually put time into your creation, you’re rewarded handsomely.

As someone who doesn’t have any programming experience, I welcome the ability to choose how deep I’d like to go with it. MYC users have taken otherwise mundane objects, like straight line separators, and used them to spoof creases in a folding clock clone, among other things. They’ve allowed themselves the freedom to experiment with a tool that allows them to be as precise (down to the pixel!) or imprecise as they wish.

And really, isn’t that what Android’s all about?

Make Your Clock Widget is free, and in beta. Grab it off the Marketplace.
—
Matt Demers is Droid Life’s app guy, and is happy to be celebrating his one year anniversary writing for the site. You can follow him on Twitter, or send him an e-mail with a cake.