Wanted to make sure you are all aware that the Honeycomb event starts in about an hour at 10AM PST.

9:55AM:  We’re just a couple of minutes away from the magic!  If you can’t watch the live stream, then keep it here as we’ll be updating like crazy.

10:03AM:  Andy Rubin on stage and he just  confirmed that Android Market news is coming.  http://market.android.com is already redirecting to android.com, so we’re thinking it’s time for a real market.  In-browser!

10:05AM:  Hugo Barra on stage now talking about Honeycomb of course.  He’s going to walk through all of its features.

10:08AM:  Widgets are the star of the show with Honeycomb.  Multi-touch allows you to use multiple scrollable widgets at the same time.

10:09AM:  Notifications revamped in 3.0.  They are non-intrusive, but also can be deeply customized by developers like controlling music right from the notification bar. 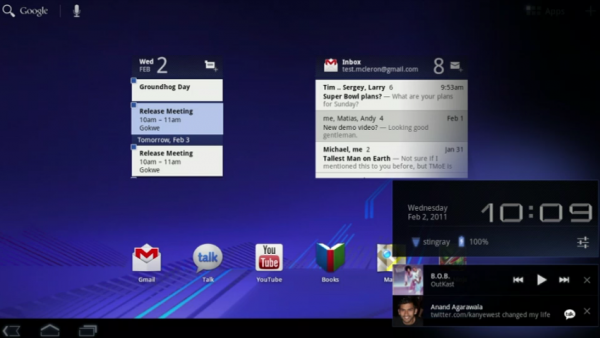 10:10AM:  Showed off Fruit Ninja and how it wasn’t built for Honeycomb, but looks and plays amazing without being tweaked.  Also, you’ll notice the notification bar is available at all times.

10:13AM:  Time to talk about performance.  1 line of code to current apps by developers can add hardware acceleration.  They’ve also added an amazing animation framework and a new graphics engine called Renderscript.  Just showed a demo of Renderscript in action through a book on Honeycomb.  Turning pages looks flawless and smooth.

10:24AM:  New CNN app built for Honeycomb.  You can report live news from anywhere.

10:32AM:  It’s time to talk about the new Market and cloud services.

10:44AM:  And we’re back.  Time to talk about new ways to purchase apps.  Buyer currency supports is on the way.  Users will be able to set up how they want currencies to be displayed in the market.

10:47AM: Google has been working with a few select developers to get in-app purchases up.  Disney is one of the first and will have 3 apps soon.

10:53AM:  Cee-Lo just called in on Gtalk and announced new album.  We were hoping that meant Google Music was going to be announced, but that wasn’t the case.