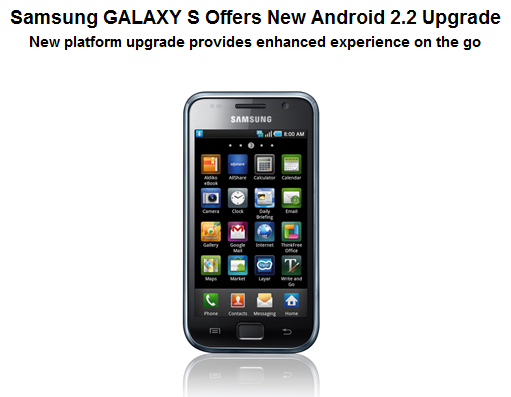 Samsung announced today that their Galaxy S lineup of phones is starting to see Android 2.2 in the “Nordic” region of the world, but should filter out to the states by the end of the year.  OK, it doesn’t even say “end of the year” it says “gradually.”  Quite the timeline right?  At least it’s happening!

One interesting thing to note is the point made in their press release about Froyo featuring “Google Maps with Navigation.”  The release specifically mentions our favorite navigation app as one of the key features, but as you all know, the Fascinate (review) comes packed full of Bing.  Any chance this sneaks onto the Verizon version without that other search engine suite?  Unlikely.

The Android 2.2 upgrade will be available via Kies, Samsung’s unique in-house software upgrade program. Kies can be downloaded at the Samsung mobile website (http://www.samsungmobile.com).

The Android 2.2 upgrade will be available from the mid of October 2010 in the Nordic region and gradually rolled out to other European markets, Southeast Asia, the Middle East Asia, North America, Africa and rest of the world.