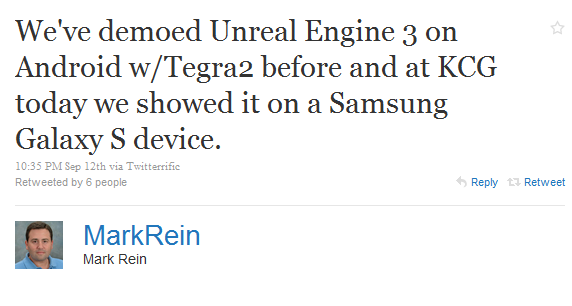 Mark Rein, VP of Epic Games has unofficially announced via Twitter that their Unreal Engine will make its way towards Android at some point in the near future.  Pop the champagne bottles?  For the non-gaming crowd, just understand that this is well, “epic.”  Epic is in charge of the Unreal Tournament and Gears of War franchises which have been globally popular in both PC and console gaming circles and also happen to be known for ridiculously amazing graphics.  Let’s just say that an Unreal Engine backed game on an Android tablet with a Tegra processor might just be orgasmic.  (Is that SFW?)

And an Unreal Engine game running on a Tegra Android tablet:

Anyone feel like firing up some UT99?  (Cheers Justin.)