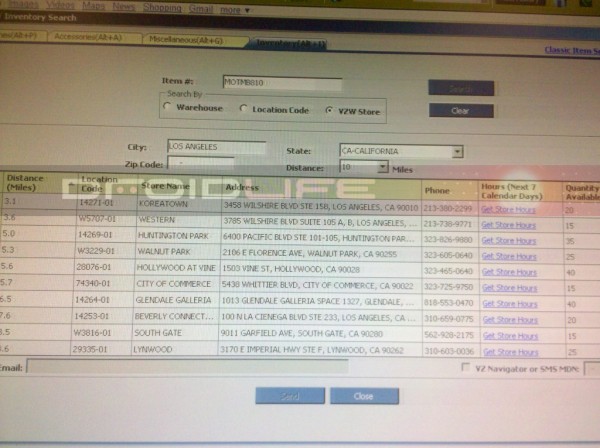 Been feeling a little heat this morning from some people not wanting to believe that the Droid X stock will be limited on launch day, as we reported earlier.  Well we’ve just grabbed 5 additional screenshots from 5 pretty major markets and I’d say again that inventory looks to be pretty limited to me.  Some of the major stores have upwards of 60+ (which I previously mentioned), but some are seeing as little as 5 (yes I said 5).

Now maybe these numbers are above average for a Verizon launch, but for a device this big, I guess I just figured stores would have tried to have been overstocked.

And who knows, maybe they’ll load up even more devices by Thursday and these numbers are simply premature.

Check out Los Angeles above and the rest of the screenies after the jump!

How about Las Vegas?

And how about NYC?

Oh and hopefully these will help you decide which store to go camp out in front of.  Your welcome!

Update: My inventory guy has started fulfilling a few requests and at least locations appear to have more stock than others.  Maybe the rest of their shipments are starting to arrive?  I hope so!  And be sure to say thanks in the comments as our source will read them…

And that’s all of them!