I’ve written about Android needing a client before, so I was a bit happy when I discovered DoubleTwist. It was pretty much what I wanted for my phone: a program I can run on my desktop that allows me to interact with the contents of my Droid. It even allows me to search the Android marketplace, which, up until recently, I couldn’t even do on  Google’s official site!

However, at the time of my first interest, that feature wasn’t available for Windows – I decided to give it a pass until I could actually, you know, use it. Hearing that it had been updated today, however, had me installing faster than a pirate with unlimited bandwidth.

But then I found out how bad it was.

See, I was under the impression that DoubleTwist would actually be useful to me in some way. Here, let me illustrate. 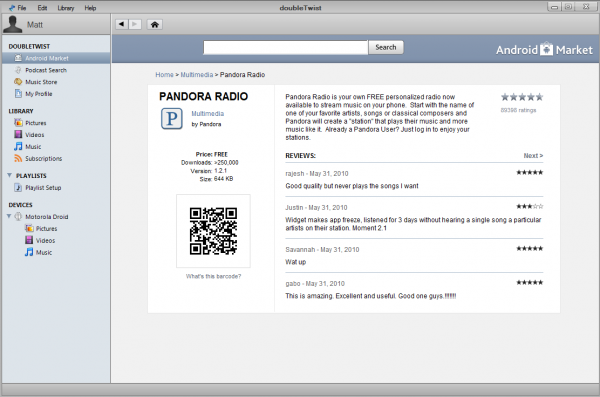 This is an example of a listing on the Android Marketplace within DoubleTwist. As you can see, it deceptively looks useful: it has ratings, comments, a well-laid out listing, hi-res logo, and QR code.

Wait, what? QR code? Why would we need that if we’re downloading apps using the client?

That’s right. A client with access to the Android Marketplace does not allow you to download apps: DoubleTwist themselves tell you to download a bar code scanner app for that. It doesn’t allow you to bookmark, list, sync, update or share them, either. It doesn’t even let you comment/rate applications within it’s window: the site’s FAQ tells you to go to back to your phone for that, too. In essence, it doesn’t do anything of the things that I would expect a client to do, nor does it make it any easier to use my phone. The only advantage I can think to using this program is because the listings are ad-free and look pretty. That’s it.

Another thing I would consider using a client for would be to view what’s on my phone already – not applications or anything (because DoubleTwist doesn’t do that, either), but pictures and video. DoubleTwist does do this, but there seems to be a big roadblock: I can’t get them off my phone.

While the issues I had with the marketplace integration were answered within the site’s FAQ, for this I might just be a little bit shortsighted: can anyone see in the above screenshot (click to enlarge) where I might be able to transfer my photo off? I mean, the “Play” and “Close” buttons do just that: start a slide show and close the window. The “Flickr” and “Send” buttons upload to Flickr and send media by e-mail, respectively; you can also upload videos to Youtube. The “remove” button deletes the media.

Apparently, a “Save As” button is too much to ask for. Even the Motorola web interface has that.

DoubleTwist’s big selling point is that it allows you to sync music and video folders (along with podcasts) to your phone. However, I don’t really see the point: if I’m going to be in my SD card folder in Windows Explorer to copy pictures I’ve taken over to my hard drive, why not just spend the few extra seconds to transfer a folder of music over?

Ultimately, I simply can’t find a use for DoubleTwist, and can see it becoming obsolete when Froyo comes out for the Droid: I mean, we’ll have a better-featured market, and the ability to stream our music from our computers without the need for any transferring. Hell, we’ll even have a better marketplace!

Kind of makes you wonder what roadblock was in their way towards making something functional. There are numerous methods of syncing files and photos using the cloud (Dropbox, Zumodrive, etc) as well as apps that have made updating/installing a near-automatic process (AppBrain); what stopped DoubleTwist from being successful? If anything, they should have had an easier time, as they have the benefit of a USB connection.

With the announcement of the new browser-client hybrid that comes with Android 2.2, my pipe-dreams of a desktop browser might just be dead. Who knows? Maybe Google will surprise us, as they have before, and give us something better.