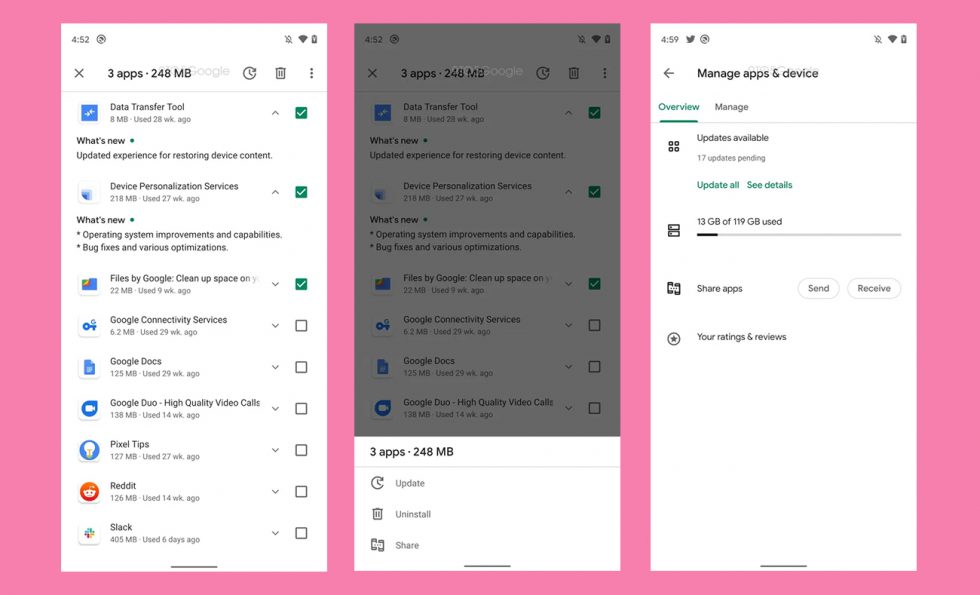 Google appears to be testing a reworked My Apps section on Google Play, but beyond just the looks, it’s going to offer a new app sharing feature. Accessed by 9to5Google, we have an idea of how this redesign could look, as well as what to expect from this sharing option.

Right now, this section in Google Play is called My apps & games, but following the update, its name may be Manage apps & device. You see, from this new section, a user will be able to quickly see how many apps need updates, quickly update said apps via a button (similar to what we have now), view device storage, as well as view all of the ratings and reviews associated with your account. It’s basically a more streamlined place for things currently scattered inside the Google Play app. Currently, these things happen across four separate tabs.

You’ll also a see a name change or two, though, all the same functionality exists. For example, the current “Library” tab, which are apps not installed on your device, will be renamed to Installed and Not Installed. Smart.

For the sharing functionality, this appears to be catered to those more in “low bandwidth markets,” allowing users to literally P2P share applications. The authenticity of an app would then be checked by Google Play, so the user need not worry about a fraudulent app getting onto their device. We don’t see this feature getting a lot of usage in the US, but it sounds nifty enough.

There’s no telling exactly when we can expect this redesign, but I’m ready for it.