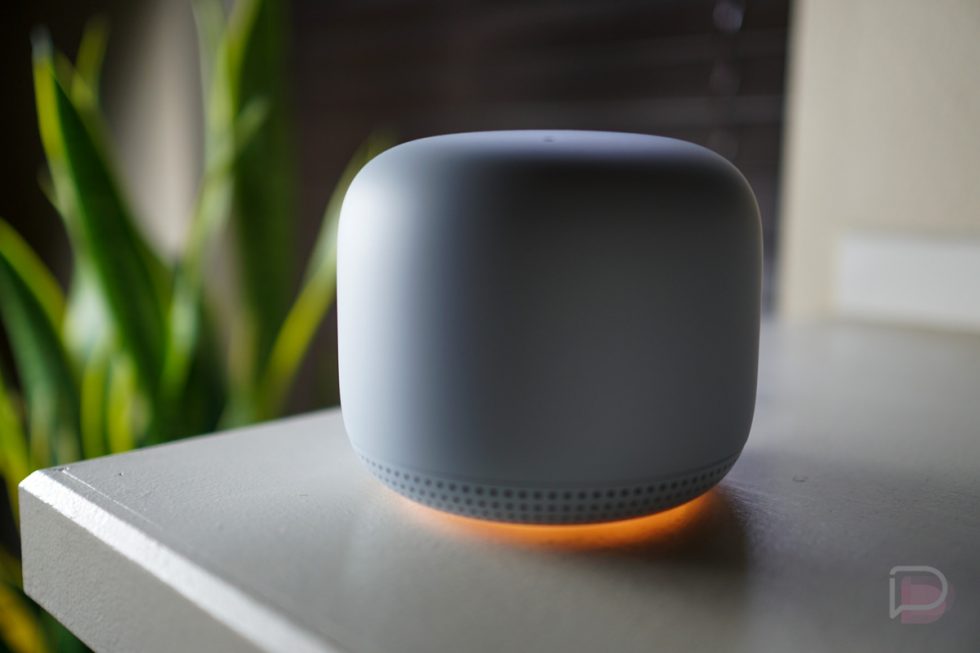 These days in the home WiFi business, it’s all about the mesh. People want their WiFi to reach every nook and cranny in the home, and considering how much some folks pay for their internet, we think they deserve that type of coverage. Helping get WiFi where it needs to be across a home is mesh technology, something you’ve likely seen either marketed from your ISP or on countless tech blogs.

If you’re new to the mesh game, it’s pretty easy to understand. With the Nest WiFi system and the Google WiFi system before it, you hook up a router point to your modem. That router then connects to additional WiFi points that can be strategically placed throughout your home, blanketing your home in WiFi goodness. For folks in 2-story houses or just large homes in general, a mesh network can help solve connectivity issues you may have.

In the following review, I’ll go over my experience with Nest WiFi, after having upgraded from Google WiFi that I’ve had in my home since it was first released. 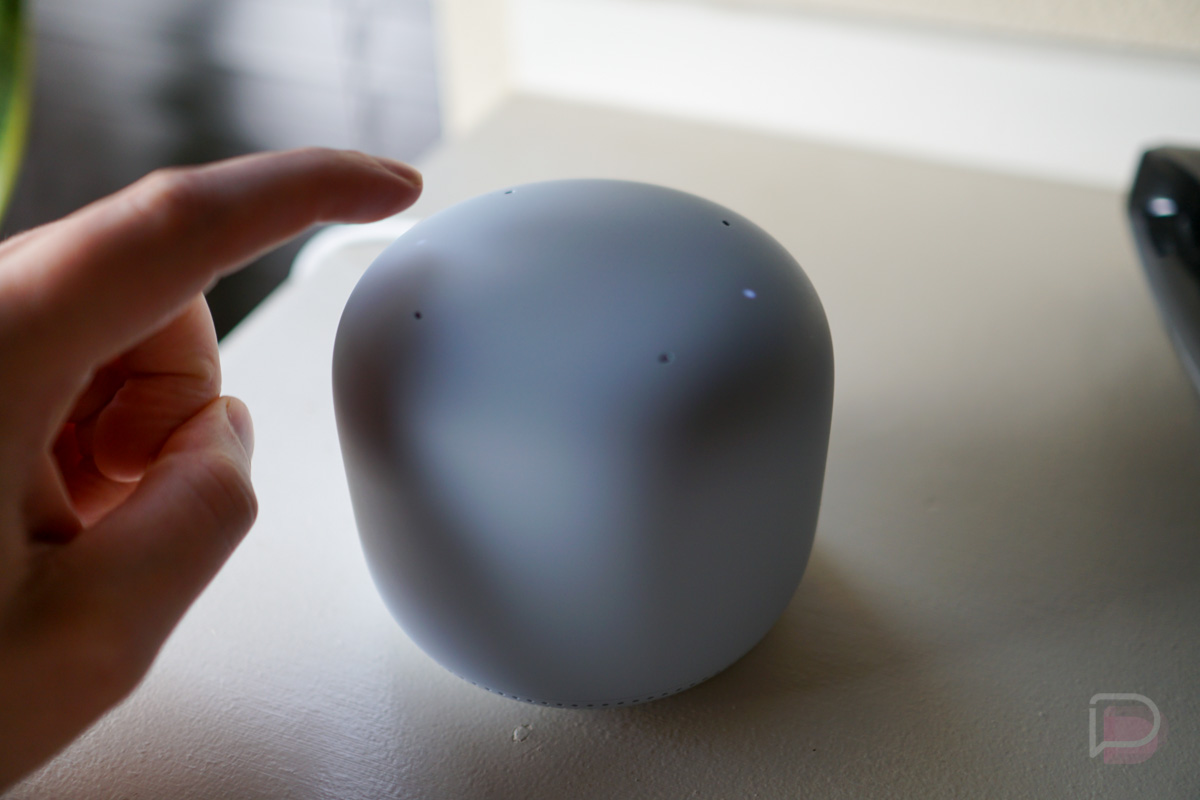 Ease of setup – Setting up Nest WiFi is done so through the Google Home app. This is the same app you set-up pretty much all of Google’s products, which makes controlling array of Assistant-powered things pretty easy. After you connect your initial router point to the modem, you’ll ensure it’s connected, then go through the process of connecting additional points if you have any.

Once everything is up and running, your Nest WiFi network is controlled inside of the Google WiFi app, though, a lot of minor settings can still be managed via the Google Home app. In total, it should take about 15-20 minutes to have your entire network up and running, with most of that wait time being all of the mesh pieces booting up and connecting to one another. If you do run into issues, Google has a 24/7 phone support service for WiFi customers. I’ve spoken with them on a couple of occasions and my experience is always pleasant. 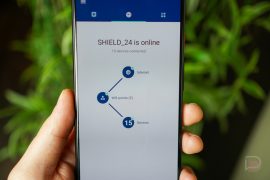 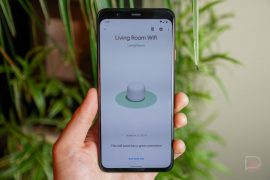 Hardware/Audio – I quite liked the look of the original Google WiFi, but this new Nest WiFi also looks pretty good. Like a lot of the other Google and Nest products, it’s designed to blend into any household, and if your WiFi hardware is decent enough, you should never really have to mess with it. Once you set it all up, you should be able to forget about it. So far, I haven’t had any issues with connectivity or the hardware malfunctioning.

Unlike Google WiFi, the additional points for Nest WiFi feature a speaker and Google Assistant built-in. Thanks to that added functionality, you can use Nest WiFi as a Nest Mini capable of streaming music. I’ll talk more about Google Assistant below, but if you’re curious about sound quality, it’s on par with the latest Nest Mini device. While it won’t blow you away, it’s fine for mellow music playback and feeding you answers from the web or telling you the weather. 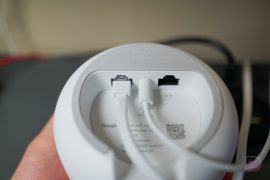 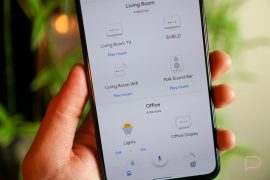 For ports, things get pretty dismal. The router point itself features 2 LAN ports (technically one since you’ll need one of them to be connected to your modem), which is hardly enough for those who want to hardwire multiple devices, such as a desktop computer and a gaming console. I wouldn’t say this is a dealbreaker for me, but it could be for you, unless you want to add on a switch for the system. Even more depressing is the non existence of ports on the Nest WiFi points, which differs even from the original Google WiFi points that had usable LAN ports. I haven’t had issues with not being able to hardwire things, but I know a lot of people do prefer the hardwire, so that’ll be a personal preference for the buyer.

On the upside, Google WiFi points are compatible with a Nest WiFi system, meaning you can use Google WiFi points that have LAN ports available across the home should you choose. You could also opt to use additional Nest WiFi router points instead of non-router points, since they not only offer LAN ports, but also feature AC2200 WiFi versus AC1200 on the WiFi points. That method could potentially provide greater speeds.

The last point about the hardware I can made concerns the color options. Yes, Google offers different color options for the WiFi points. While all of the router points come in White, you can get the WiFi points in either White, Mist, or Sand. This may seem a bit silly, but if you have a certain style going in your house and would love for your WiFi to fit in with the feng shui, then colors can help with that. 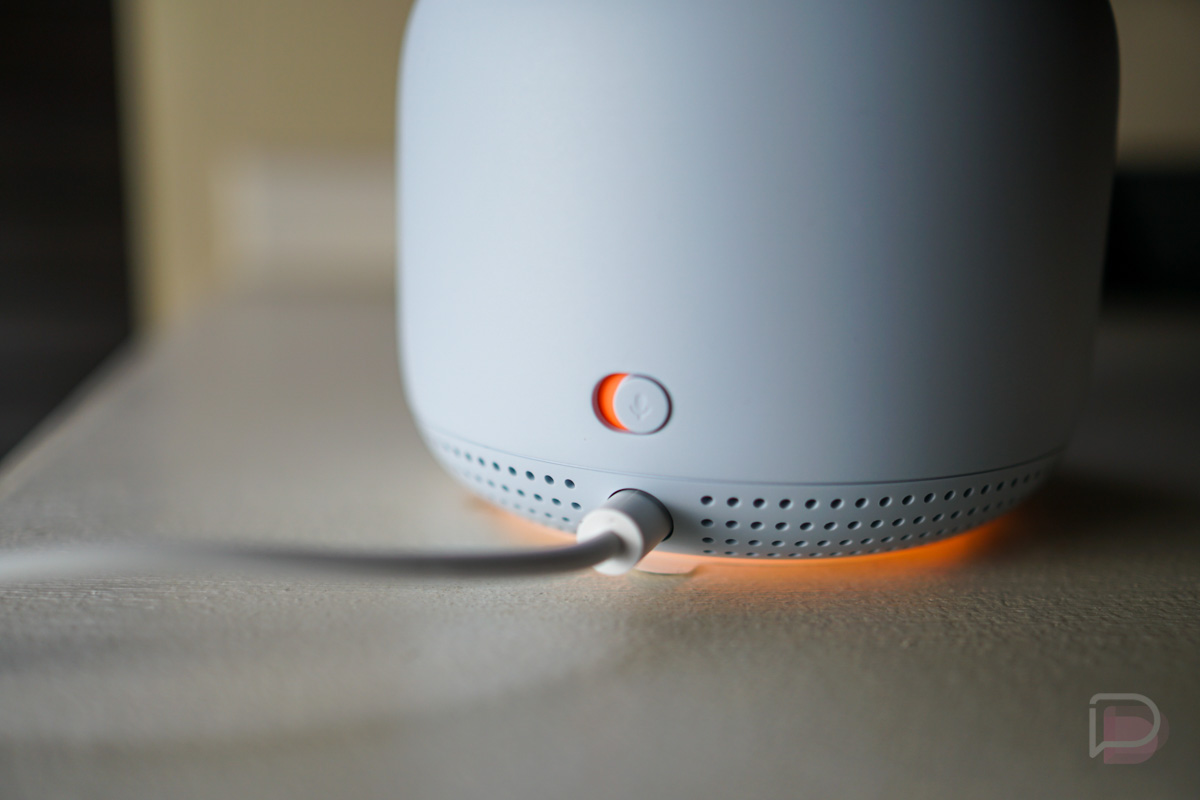 Controls – As I mentioned, comprehensive network controls are handled inside of the Google WiFi app. In the app, users can view every single device connected to the network, usage details for those devices, perform network checks, set priority devices, create guest networks with custom passwords, apply family controls, as well as access advanced network controls for the IT nerds among us. No offense, IT nerds, we love you and would be completely lost without your depth of knowledge.

Again, over the course of the week I have had Nest WiFi connected, I haven’t run into any issues that would warrant me digging through any of this. That’s a good thing, but thankfully, should something arise I know I have an app straight from Google that can probably help my troubleshoot the issue. If the app doesn’t do the trick, 24/7 phone support is also clutch.

Speed – To talk about speeds, you’ll need to be made aware that I have a Gigabit plan from my local ISP, Comcast, but don’t currently have a modem capable of utilizing those speeds. I do plan on upgrading soon, but you know, life happens. With Google WiFi and my current Arris SB6190 modem, I would average about 200-300Mbps downloads, with my upload speed capped to 30Mbps. On Nest WiFi, I’m getting about the same, but I have noticed I’m getting better, more solid connections. 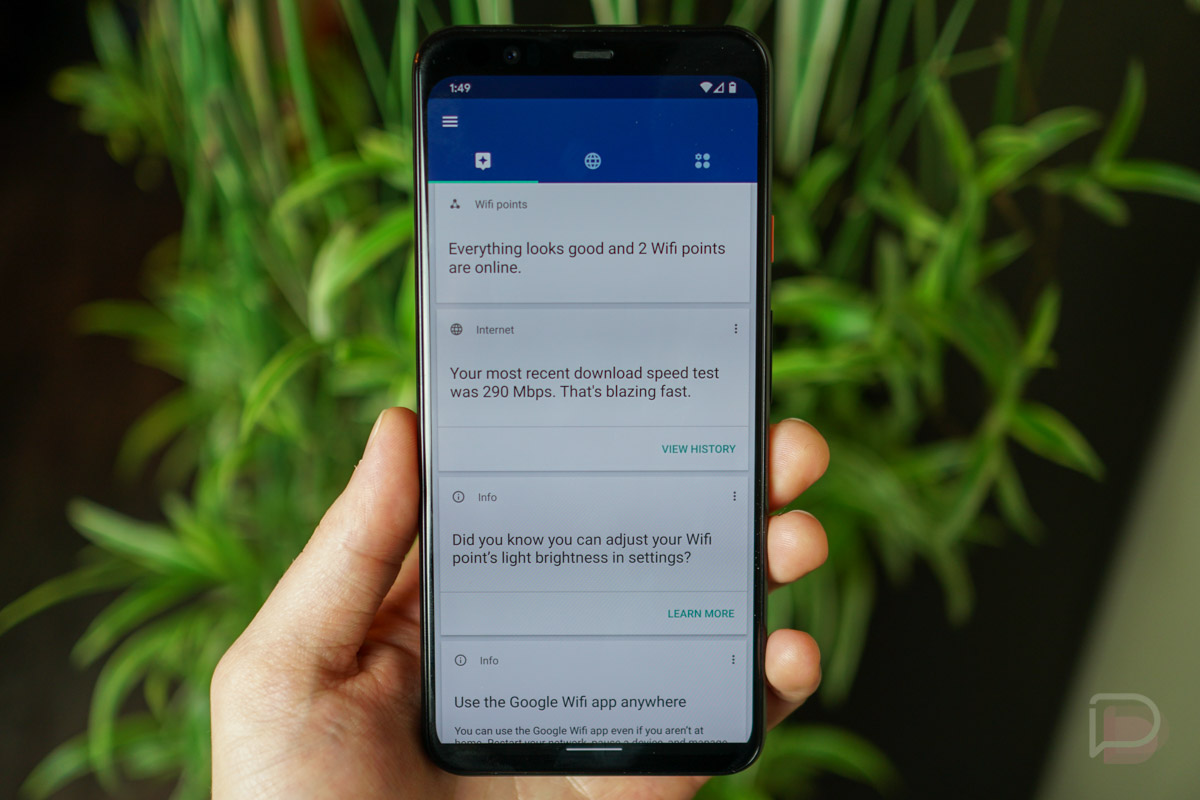 According to a Network Check in the Google WiFi app, my network’s current speed is 290Mbps down and 27Mbps up. That’s with my outdated modem and Nest WiFi. Those speeds are great for basically anything you’d wanna do on the internet. You can stream 4K games via Stadia, stream 4K movies from Netflix, plus anything else you can imagine. When hardwired into the Nest WiFi’s router, I see the same speeds, but to really see if mesh is worth its price, it’s all about WiFi speeds when connected to a secondary point. When on my MacBook downstairs on the couch, and connected to my downstairs point via 5GHz (my router is located upstairs in my office along with my modem), I’m getting 177Mbps down and 29.7Mbps up. Those speeds are just fine for me, considering when I disconnect the secondary point and only have the router point connected, my computer pulls down just 110Mbps. Is this enough proof for me to believe in the magic of mesh WiFi? As someone who is very far away from greatly comprehending WiFi network technology — yes, yes it is.

Google Assistant built-in – Yeah, Google Assistant is available in the additional points for Nest WiFi, but not the router point. My guess is this is due to internal space for the speaker and what not, since the router has the extra LAN port, but regardless, after the first day or so I turned off the mic on the Nest WiFi point because I already have every other speaker in my house listening to me. It works just fine for controlling your smart home or listening to music, so if this will act as a Nest Mini in your home, it’s perfect. If you already have better speakers dedicated to this sort of thing, you’ll probably do what I did. 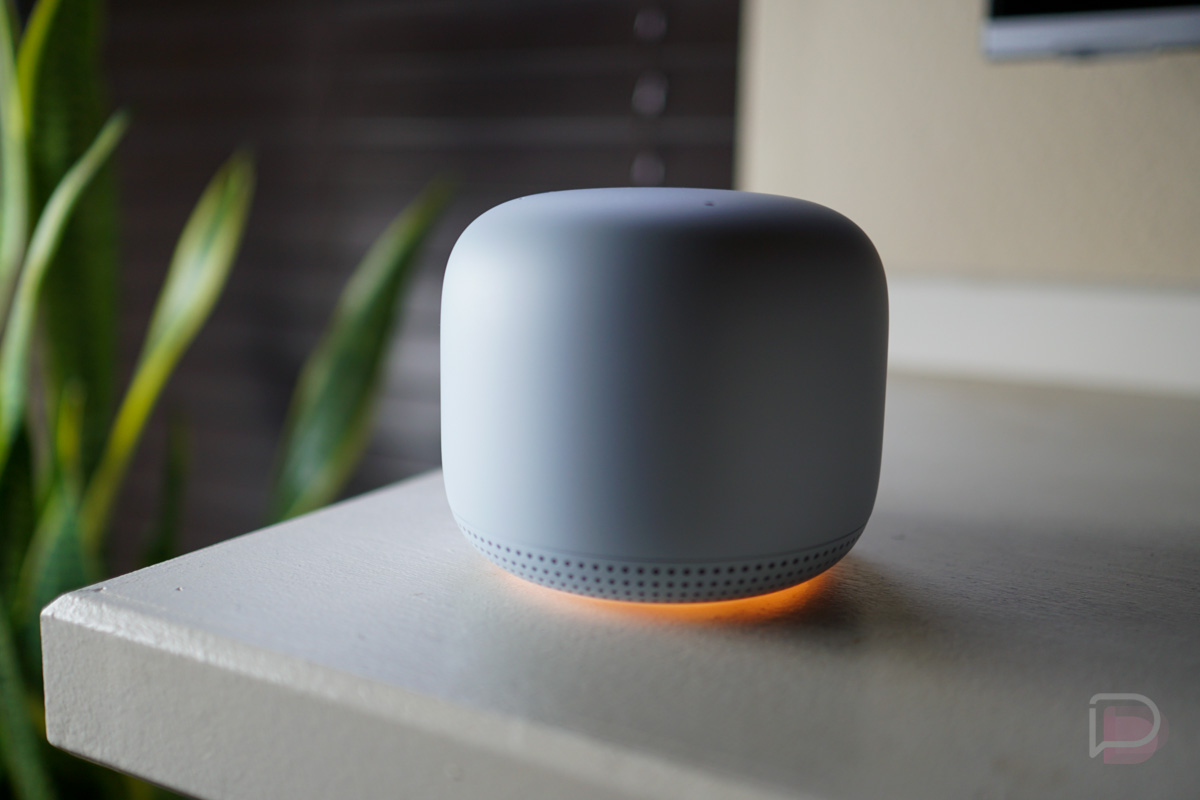 For clarity, I absolutely hate saying “Ok Google” and then trying to throw my voice so the correct speaker hears my commands. There are far too many Assistant devices in my home, and come 2020, I think it’s time for a spring cleaning. Back to Assistant, though.

The Assistant experience with Nest WiFi is the same you find everywhere else. It can tell you the weather, play tunes, connect to Digital Wellbeing for some odd reason inside of the Google Home app, and it also supports Duo calling. If you love Assistant, it’s great. If you just want the mesh WiFi, just turn off the mic.

Not exactly future proof – When we first learned that Google would release a followup to Google WiFi, it seemed probable that the company would include the WiFi 6 protocol to ensure some sort of future proofing for the system. Unfortunately, that’s not the case, which means eventually, there will likely be another rendition of Nest WiFi that offers it, but likely way after WiFi becomes mainstream. Yes, this is another case of Google behind behind the curve. WiFi 6, in layman’s terms, is designed to offer better connections to devices that have WiFi 6 capabilities. It’s not all that new either, with phones such as the Galaxy S10 and Galaxy Note 10 offering support for it, which is why it was believed Google would offer it in its new Nest system.

From what I’ve read, Google opted against including it because of pricing and relative lack of WiFi 6 adoption. One could easily argue that this is a “What came first — the chicken or the egg?” issue. If this system had WiFi 6, maybe people would be more inclined to seek out a phone with WiFi 6 support, but the device has been released and there’s no changing that now. Also, if you’re like most people, you aren’t upgrading your WiFi hardware on a yearly basis, which means if you buy Nest WiFi and don’t touch it for a couple to a few years, the WiFi tech you’re running in the home could be considered pretty outdated. It’s a pretty weak move on Google’s part to say the least. 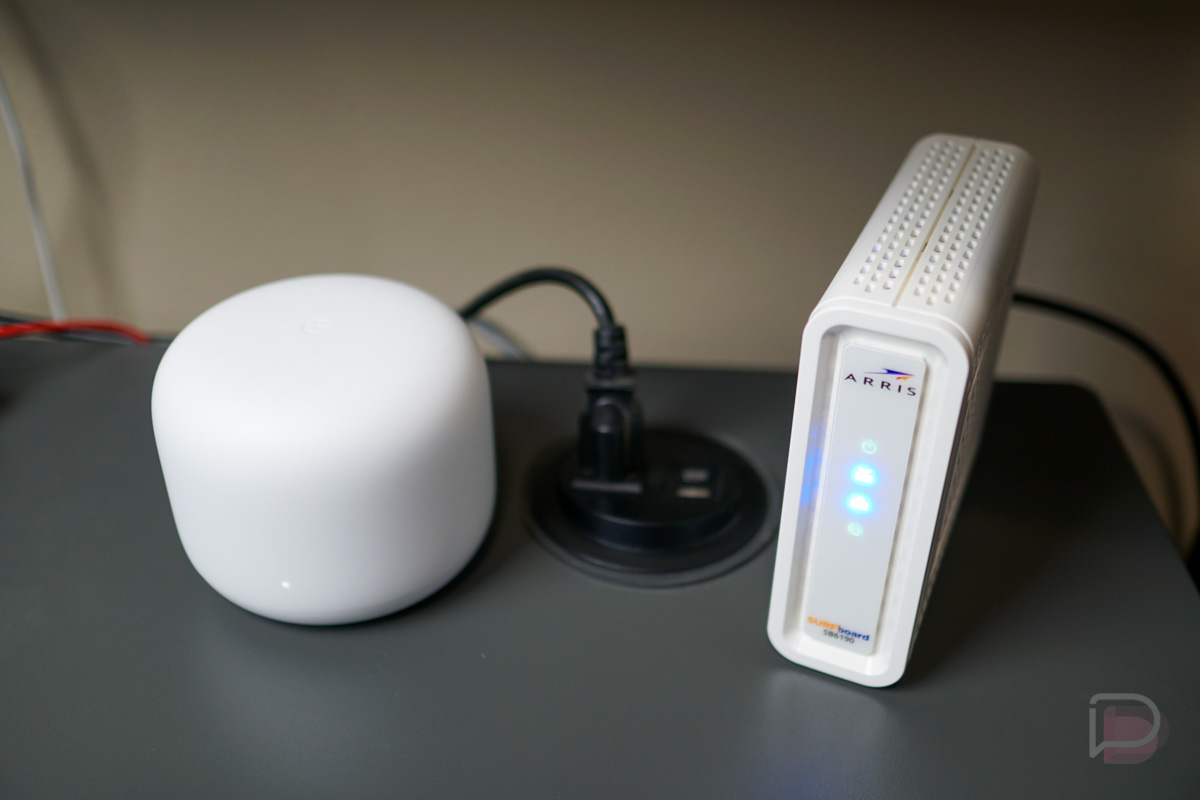 Should You Buy It?

There are a lot mesh WiFi options out there, but if you’re heavily invested into Google’s ecosystem and/or want that dual functionality of having a Nest Mini inside a WiFi point, Nest WiFi is a good option.

A 2-pack of the system costs $269, with additional points priced at $149 each should you add them on afterwards. That’s not an insane price, but there are plenty of other options out there. However, I would argue that the added value of Assistant built-in, the great customer support, and ease of network management is what makes me really enjoy having Nest WiFi. Since I’ve had it set up, dating back to when I first connected my Google WiFi, the system has just worked and I’ve never really had to get in and futz with it. I think this is what most people want from their WiFi, so if you had to put a price tag on that, I suppose it’d be $269 for a 2-pack.