So, this is a bit surprising as we head into the weekend, but Verizon is ready to push Android Oreo updates to the Samsung Galaxy S7 and Galaxy S7 Edge.

UPDATE: Those who have picked up the update have told us that this is not Oreo and is instead just a security patch. Verizon’s changelogs sure do say Oreo, so I guess they got a little ahead of their own schedule. 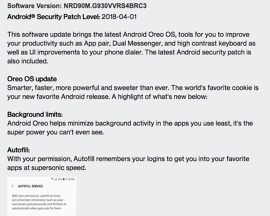 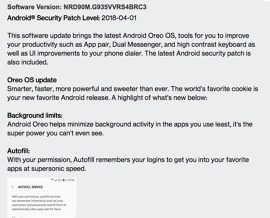 UPDATE 4/20: Verizon has now realized that the update is not Oreo and went ahead and pulled that changelog we showed you above. Just a security patch!

9Verizon has dated the updates as being ready on April 18, though I’d imagine they’ll begin rolling out tomorrow April 19. Still, the full changelogs are posted and this sure looks like the real deal.

To check for the update, head into Settings>About phone>Software updates>Check for updates.