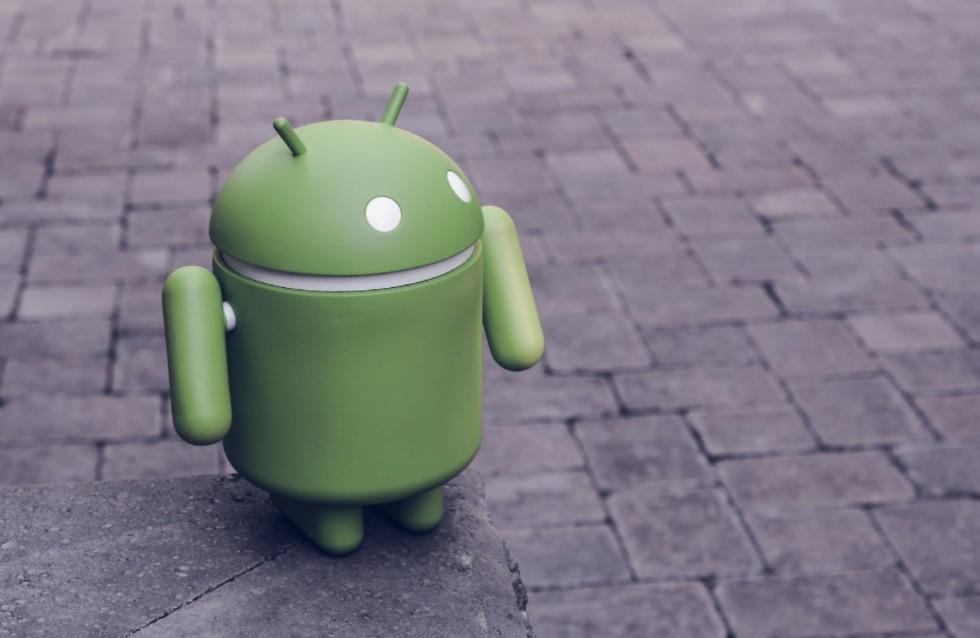 Yesterday’s Android distribution numbers should be the final numbers released before Android O goes stable and starts rolling out to Nexus and Pixel devices, as well as manufacturers who want to get updates ready for their own phones. We included a small chart in that post that showed the past year of data from Google, but decided to come back today with all of it dating back to June 2012 (We went back to June 2012 because that’s as far back as Google began sharing this information.). That’s right, we’ve got a couple of small charts below that shows you Android distribution (the percentage of specific Android builds at any given time) for the past 5 years.

What’s the point? Well, really just to show you a visual representation of how Android versions have been adopted over the years. Because again, these distribution numbers show the “relative number of devices that share a certain characteristic, such as Android version,” according to Google. In other words, it’s a good way to tell which versions of Android are on the most devices each month, how quickly the newest versions are being adopted to new devices, etc. 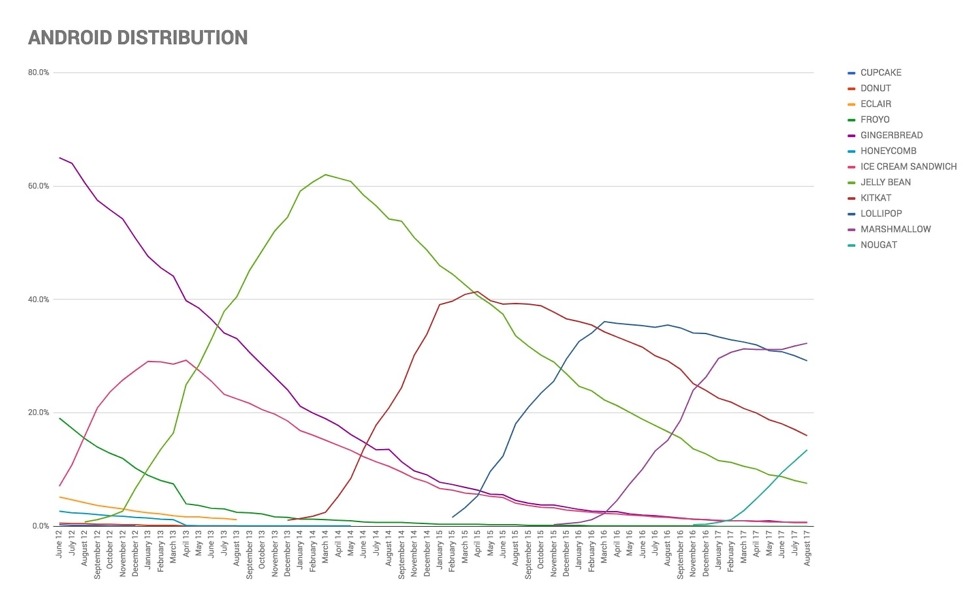 The second is the same, only with more color in case those lines are bugging your eyes. 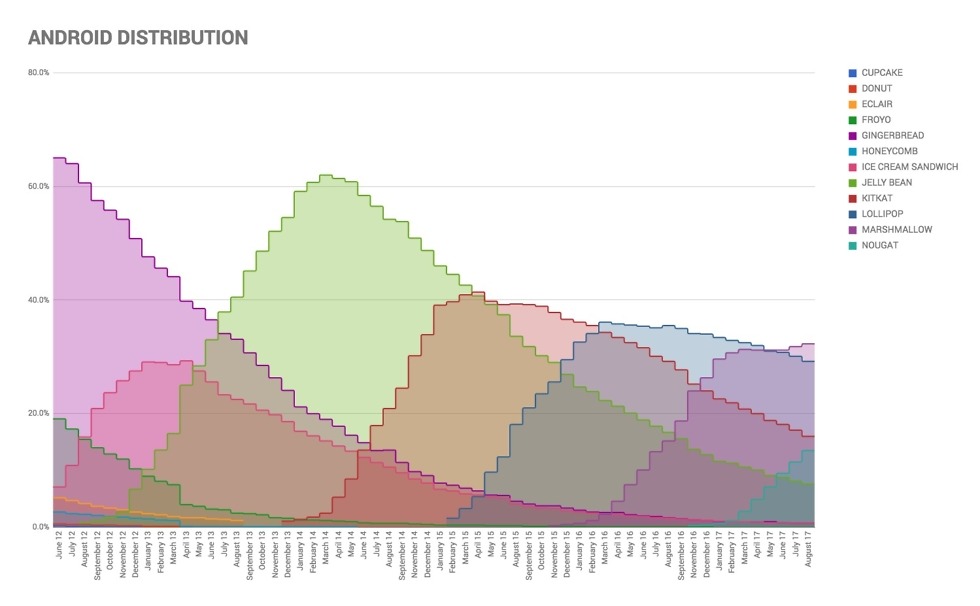 UPDATE: Some of you asked for the stacked version, so here you go. 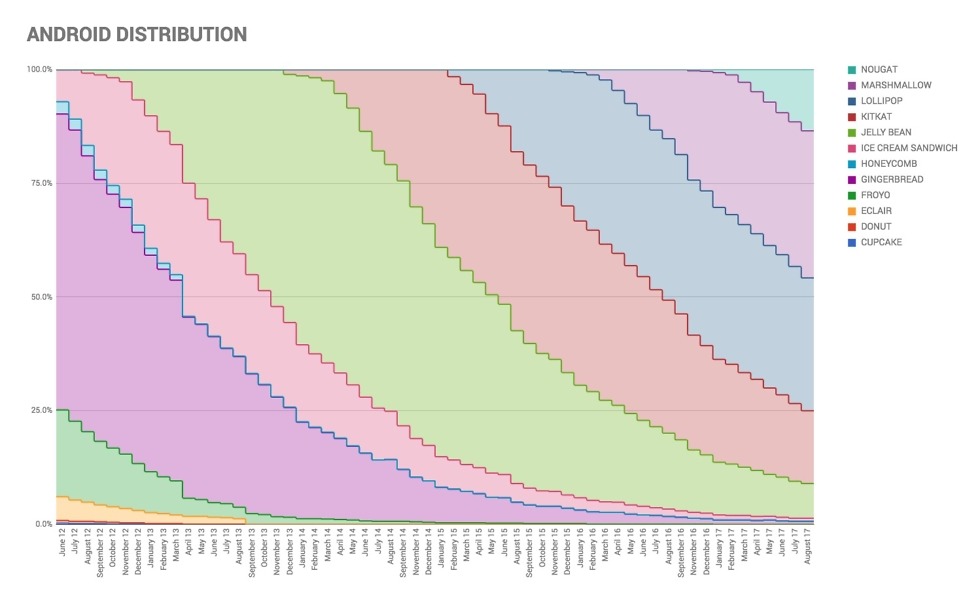 A couple of things standout to me right away. First, you can see that the extra time that Jelly Bean was around (released July 2012; KitKat didn’t arrive until October 2013) allowed for it to be adopted by more manufacturers. It peaked at just over 60% of the Android pie and was around 48% when KitKat was released. Since then, though, adoption of new versions hasn’t kept up and appears to be declining each year, especially as Android has switched to a yearly major release cycle.

KitKat topped out at just over 40% adoption and was at 30% when Lollipop was released the next year. But Lollipop didn’t ever get to 40% and sat at 23% as Marshmallow arrived. With Nougat, the numbers are even lower across the board. Should Android O drop later this month, Nougat won’t even be on 20% of Android devices.

Now, Google did say that Android O has Project Treble built in and could lead to quicker updates in the feature. It allows for Android updates to flow from Google to device manufacturer to you without necessarily having to stop and worry about additional readiness steps from Qualcomm and other chipset makers. In a way, it eliminated an entire step of the update process. Will it solve all of the Android update issues? No, because there are still manufacturers and carriers involved, though things should speed up some. You also have to remember that this new Android architecture starts with Android O and pushes forward, so older devices won’t be able to take advantage of this slimmer update process. We may not see the benefit of Project Treble for a couple of years.

So what’s the takeway then? These charts show you what we’ve known about Android for a long time – that there are enough players in this game making it impossible for everyone to keep up. Call it fragmentation or understand that this is just how Android is built and distributed. It’s not a single entity controlling everything from top to bottom except with Google’s own phones, like Nexus or Pixel. There is almost no way for these numbers to look much different without some massive changes to the way Google makes Android and its updates available.

What we’ll have to watch going forward is whether or not tweaks like Project Treble make a difference. What will this chart look like in two or three years? Will we ever see another version of Android hit 60% or more, or will the adoption rate continue to slide?