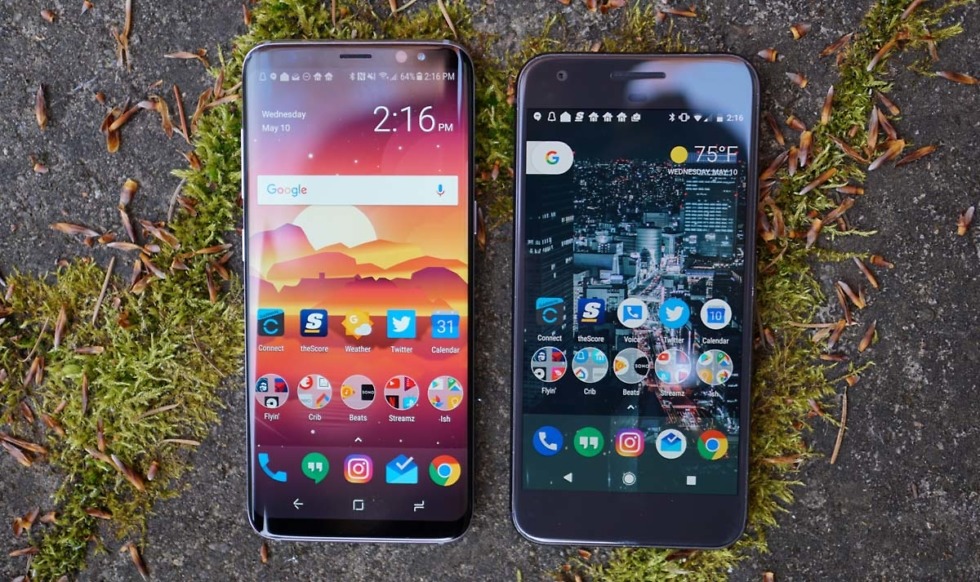 Samsung made a phone that I just told you was the best phone you could buy today. The Galaxy S8 (and S8+) still is, in my opinion. Nothing has changed on that front. It’s just not the phone for me. Even as iPhone-ish as this small Google Pixel is, with its ugly face and weird backside, it’s the Android phone that does the things I need it to in the best possible way.

Credit Google for their take on their own operating system (How silly does that sound?), but nothing beats Google’s version of Android. And to me, even with the prettiest pieces of tech on the planet staring me in the face, like what Samsung just delivered, those aren’t enough to get me to give up the cleanest, leanest, most efficient and up-to-date version of Android that is paired with a heck of a camera.

NOTE: Prepare for nitpicky criticism. I said the S8 is the best phone for most of you because it is. However, I critique phones for a living and so I notice all the little annoying things that each manufacturer does and then share thoughts on those. This is a post about that and why the Pixel is still the phone I turn to because it gets some basic things right. If you aren’t prepared for an over-anal analysis of why Samsung’s software still mostly sucks, you might want to call it a day and skip this one. 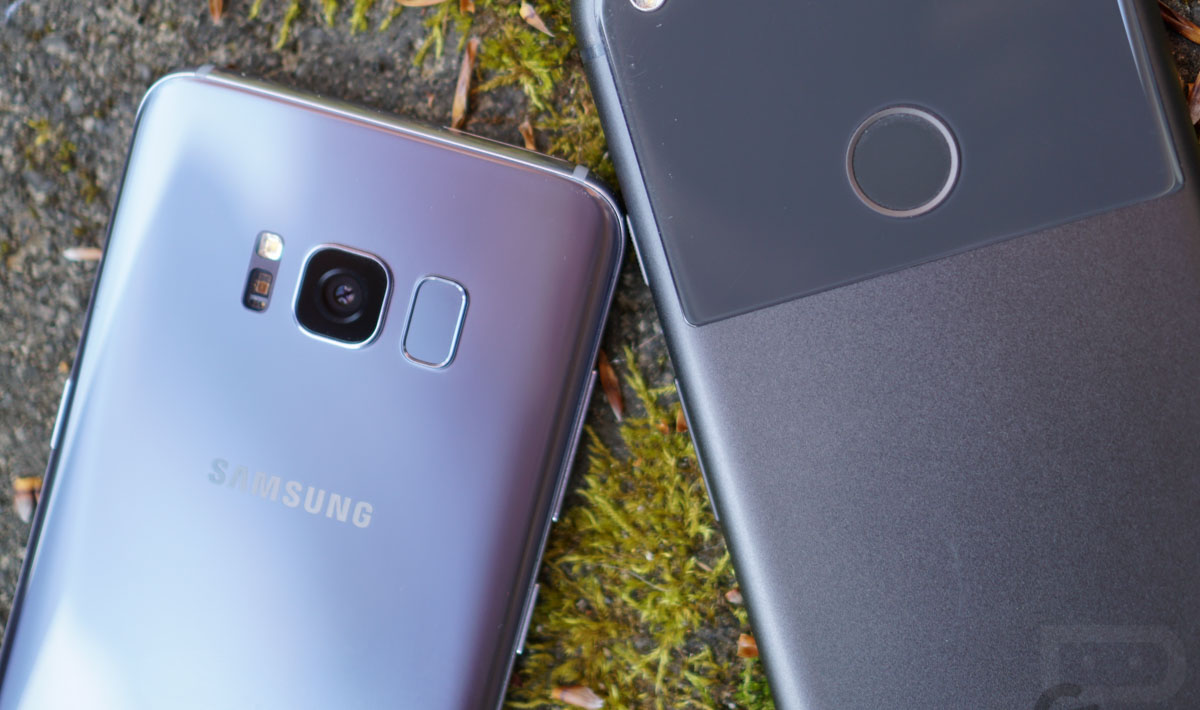 I touched on this a bit in my video review of the Galaxy S8, but there is a combination of things I do almost every time I pickup a phone that Samsung gets wrong, in my opinion. Yes, it starts with the fingerprint reader in many ways. I know, I know, here we go again on the fingerprint reader placement. But here’s the thing, I have to use it almost every time I grab a phone in order to get into my phone. If it’s in a terrible location that I still can’t find every single time after two weeks of use, I don’t think I’m overblowing this.

So with the Galaxy S8, I’ve found that as I pickup my phone, I now have to think about how I’m going to unlock it, because the fingerprint reader is out of the question. That’s a sh*tty position to be in after spending 2-3 years using nothing but fingerprint readers on all phones, including those from Samsung. I just want to grab a phone and go without having to pause before getting to work. But my brain does all of the following: Is my Smart Lock working? Maybe, if I’m at home. Do I want to even attempt to line up my eyes or face to see if those slow unlock methods work? Hah, god no. Do I just give up on all of that and enter my damn pattern? Probably. But wait, is that a fingerprint reader I feel? Which. One. Do. I. Do.

On the flip side, with my Google Pixel, I have a perfectly centered fingerprint reader on the back of the phone that unlocks my phone every time without the need for a sequence of thoughts over how the hell I’m going to check my email. Two steps: 1) grab phone; and 2) use conveniently placed fingerprint reader. That’s it!

It doesn’t end there, though. The Always-on Display on the S8 is pretty worthless in terms of providing interactivity with the information it presents. While I like the little icons that tell me if I have notifications to take care of, they don’t do anything. If I want to see what they are, I can precisely double tap on the little virtual home button or squeeze the side button of the phone to wake the lock screen. That will at least show me some of their contents. However, if I want to then dive into a notification, with a secure lock screen enabled, Samsung then asks me for another “Swipe screen to open” gesture. Wtf is that?

On my Pixel, as notifications roll in, I get a black-and-white preview of them that I can interact with through a single touch. If I miss that happening, a double tap anywhere (not just on a single button) on the screen then brings that UI back, which again, allows me easy interaction. From there, if I want to, I can get into notifications with a double tap (without an extra swipe up) and take care of my business. There are no extra barriers or swipes or precise taps or icons that tell me nothing.

And of course Bixby is there. I’m not here to sh*t on Bixby because we don’t even know if it’ll be good or not until it gets voices capabilities, but Samsung, at least give me a toggle to turn it off if I don’t want to use it. That’s it! Keep killing all the legitimate remapping workarounds you want. That doesn’t bother me. But at least let me disable the button, so that accidental presses aren’t firing it up when I don’t want it to. 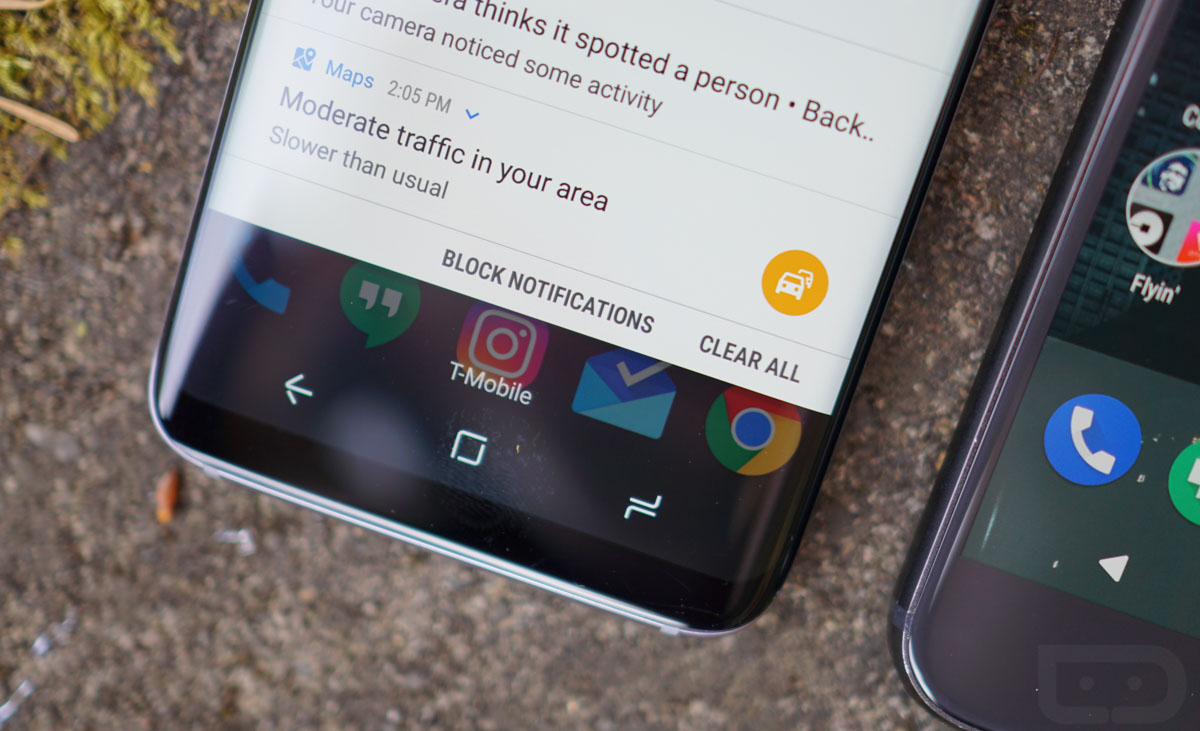 Moving on and into the S8, there are other issues like that “Block Notifications” button that permanently sits right next to the “Clear All” button in the notification shade. Why on Earth is that there? I don’t even know what happens if I press it because it scares the hell out of me. I’m just assuming that if I do, I’ll have to hunt through the 1,027 settings on this phone to unblock the most important software piece of Android.

Or what about the app switcher? Have you tried scrolling through it? It jumps from app-to-app by sliding the front-most app half off the screen. It’s impossible to figure out which app the system is trying to highlight or which one you are supposed to be touching. On my Pixel, Google drops down the app you were in (which makes sense because why would you want access to it in the app switcher?) and then lets you control the scroll to decide which app you want. It’s a free scroll from Google, while Samsung put in this jumpy thing that’s too sensitive to swipes and a pain to figure out.

What I’m getting at, even if I’m being ridiculously nitpicky and precise, is that Samsung is overthinking all of this. Be advanced in cameras and audio and in the details you provide for battery life. But unlocking a phone shouldn’t take this much effort. I shouldn’t be presented with scary ass “BLOCK ALL THE THINGS” buttons in my notification area at all times. Stop messing with system functions that work fine, like the app switcher and how it scrolls. Don’t force Bixby on me. Give me a damn opt-out if I want. 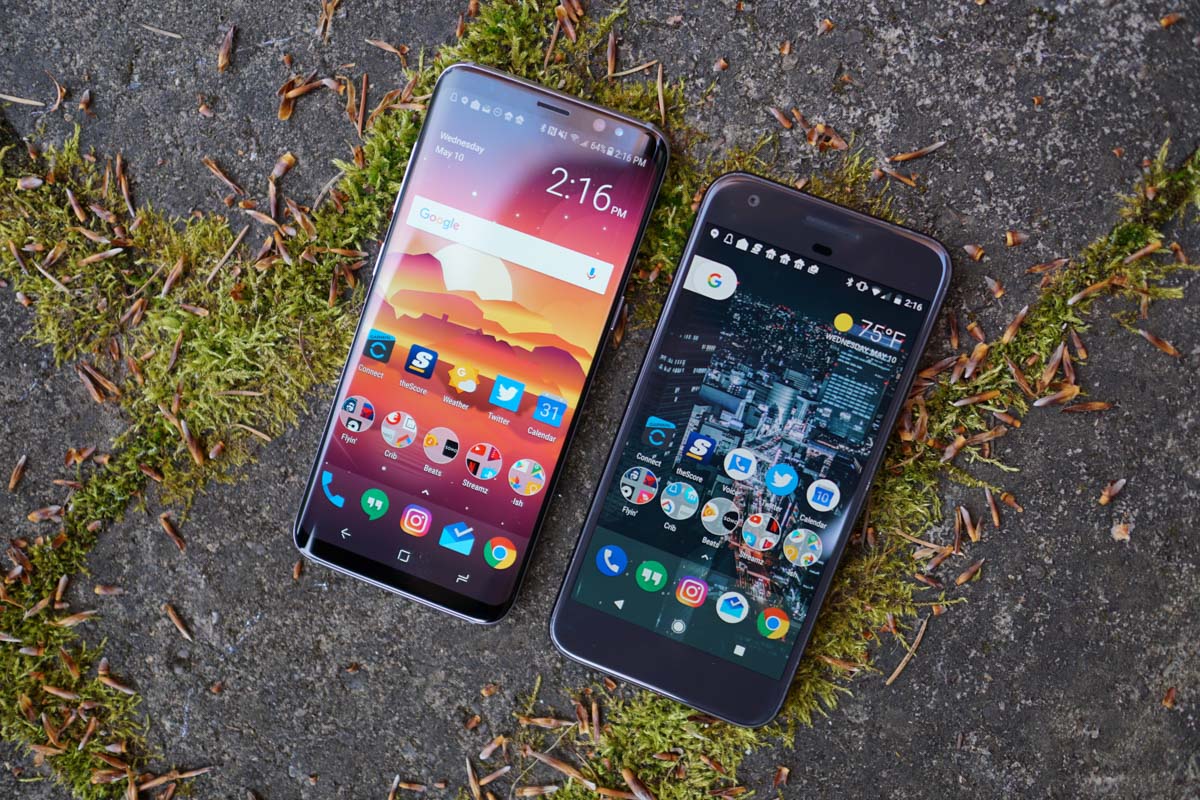 Finally, the Galaxy S8 certainly crushes the Google Pixel in terms of overall design and number of features. I’m not here to deny that at all. But I do have to admit that a part of me wonders how fragile the S8 is. It’s so pretty with all of that glass, that even as water and dust resistant as it is, I worry about drops and banging it on this or that. Not that the Pixel is by any means tough, it’s just that with its traditional bezel amount, my mind is a bit more at ease. Call that a weak excuse, but it’s what I immediately think when looking at the two side-by-side.

In the end, when I compare the Galaxy S8 to the Pixel, those software items I mentioned drive me nuts, for sure. But the Pixel also still has a camera that is equally as good as the S8’s, battery life that’s basically on-par, and I know it’ll get updates every single month, along with the bigger software releases without having to wait 5 or 6 or 7 months. Phones these days are so good, that these little things actually make a difference now. They might not have in 2010, where we all just looked forward to the next powerhouse and dealt with the garbage software experience. Now, everyone’s camera is good, as are the performance and battery lives and designs, for the most part. The little things matter. Google’s Pixel gets them right for me.