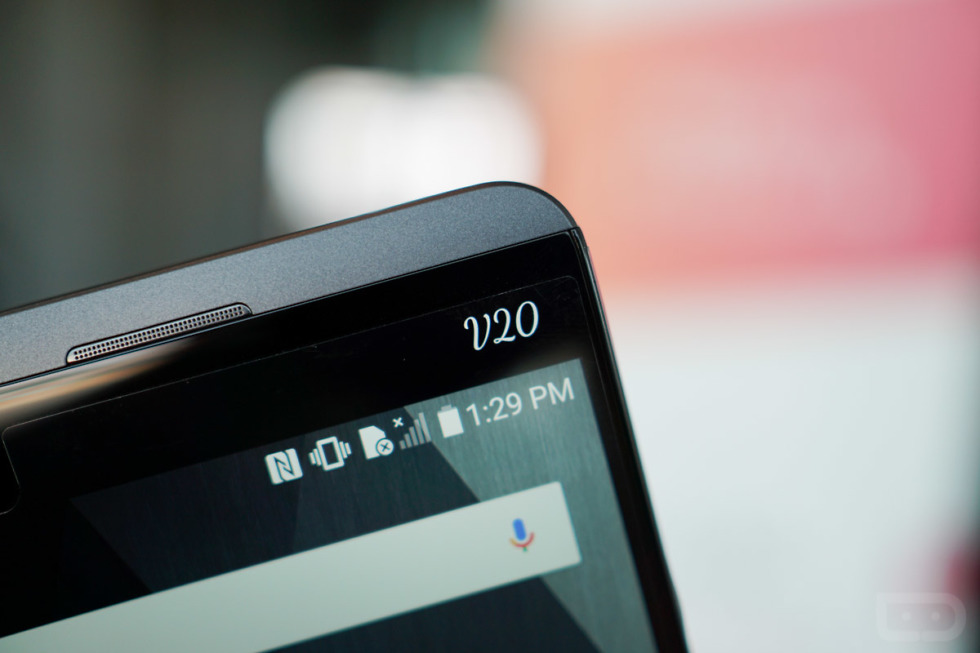 The LG V20 may have leaked here and there over the past few weeks as we led up until tonight’s official unveiling in San Francisco, but I think it’s clear that LG still kept some goodies locked up for a surprise. Not only does the V20 improve over the V10 in every category, it really has become the ultimate media nerd toy for both video and audio elitists.

In terms of general specs, the V20 features a 5.7-inch QHD main display with a secondary display above it (just like the V10), Snapdragon 820, 4GB RAM, 64GB storage with microSD expansion, dual cameras (16MP standard, 8MP wide-angle), wide-angle front camera, 3200mAh removable battery with Quick Charge 3.0, and Android 7.0 Nougat. If you just stopped there, you could easily say, “Hey, this is a sweet flagship!” But it gets better.

As the king of media, which is what LG is shooting for with the V20, you also get a 32-bit HiFi Quad DAC, HiFi video recording, HD audio recorder, all of the cameras you could ever want for all of the angles, and hybrid auto focus. With this phone, LG hopes that you can not only shoot the best mobile video of any smartphone, but take in the purest audio as well.

LG didn’t stop there, though. One of the big selling features of the V10 was its steel panels and DuraGuard protection. While you won’t find DuraGuard branding or last year’s unique design, LG is saying that they are using a lightweight, but incredibly strong AL6013 metal that can withstand drops. In fact, LG is basically suggesting that you can drop this phone and it shouldn’t break, no matter which point hits the ground first.

We’ll have more on the LG V20 in the coming days. To see a first look video, head over to this post. To see the full specs, head to this post.

The LG V20 arrives in Korea this month and then will arrive elsewhere shortly thereafter. 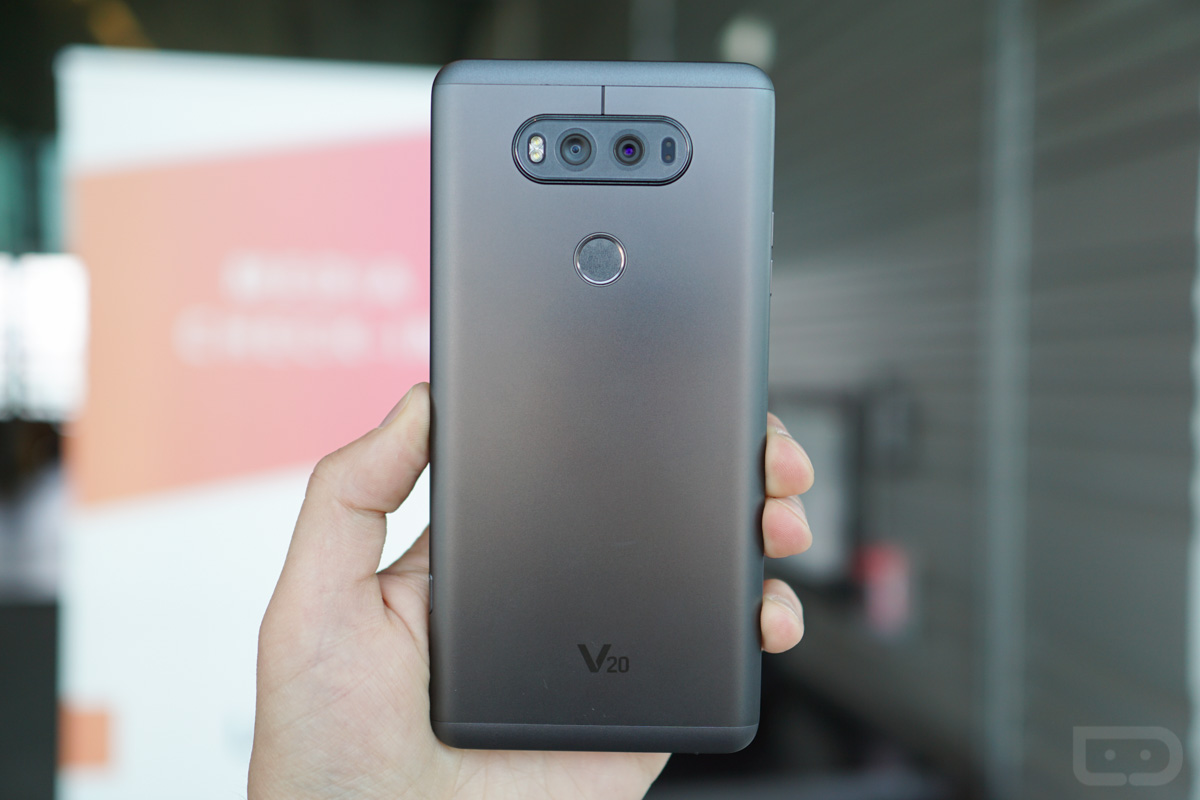 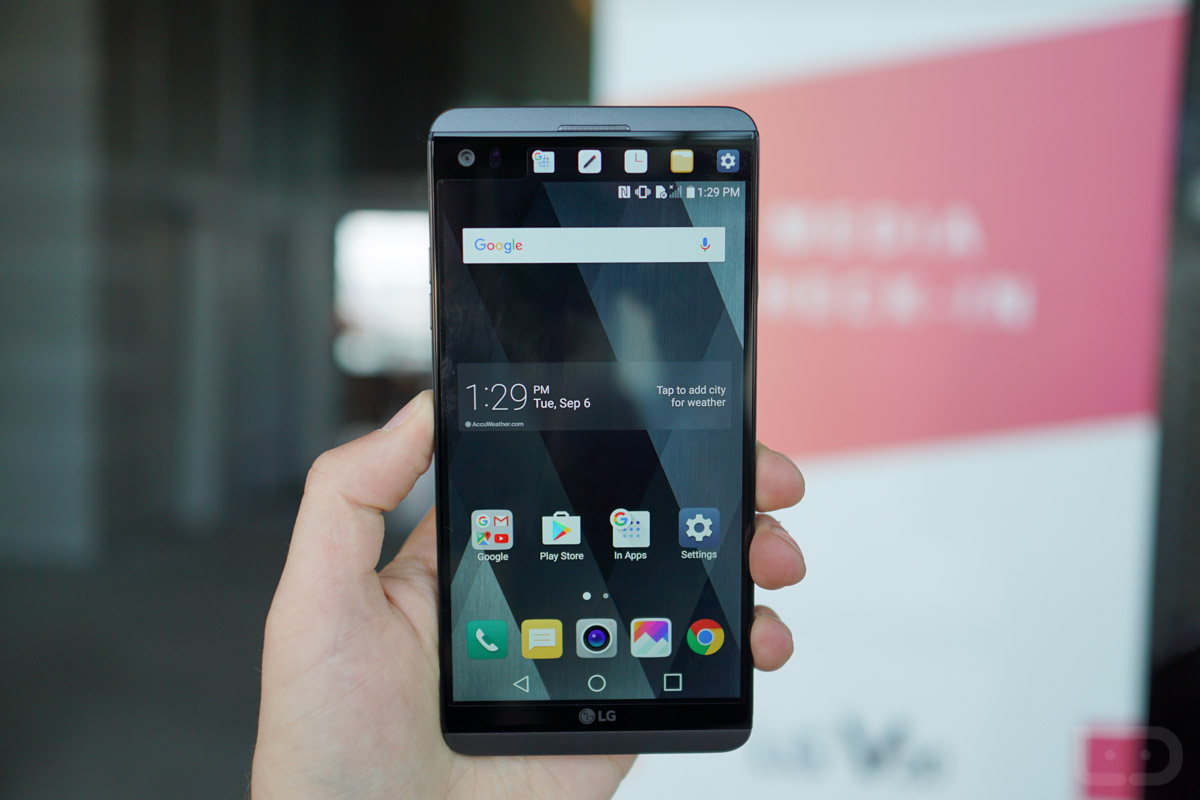 The LG V series is a premium flagship smartphone line designed to provide users with the best video and audio experience. LG looked at the customers of the V10 and examined what they wanted and needed and determined that the V20 should be developed with “storytellers” in mind – for anyone who has something to say, anyone who has an experience to share.

Hi-Fi Quad DAC
The V20 is the world’s first smartphone to feature a 32-bit Hi-Fi Quad DAC, powered by ESS Technology, designers of high-performance audio products. Powered by ESS SABRE ES9218, the Quad DAC in the V20 delivers clearer sound by minimizing distortion and ambient noise by up to 50 percent. With 75-stage fine volume and L/R balance controls as well as support for lossless music formats including FLAC, DSD, AIFF and ALAC, the V20 delivers high-quality sound to any pair of earphones.

In an effort to further enhance audio functions and design, LG continues its collaboration with B&O PLAY. The result in the LG V20 is a natural, balanced sound, reflecting B&O PLAY’s acoustic engineering philosophy.

Capture It All and More

Front/Rear Wide Angle Lens
The wide angle capabilities of the front and rear cameras capture photos with an inclusive background, meaning users get more in the frame and leave nothing out. The 5MP front camera with a 120-degree lens expands the selfie experience to take bigger pictures with even more friends. The 8MP rear camera with its 135-degree lens is perfect for taking pictures in front of a gorgeous vista or inside a gigantic stadium. The large aperture standard angle lens captures sharp images at a maximum of 16MP with its 75- degree lens.

Auto Shot
The Auto Shot Function on the front camera produces perfect selfies with its face detection feature, which triggers the shot when the subject is ready and smiling. There is no need to press the shutter button, which usually increases camera shake and the likelihood of a blurred shot.

Hybrid Auto Focus
The V20’s Hybrid Auto Focus (HAF) ensures a sharp picture every time. A fast and stable auto focus is delivered in any environment by integrating three AF mechanisms – Laser Detection AF, Phase Detection AF and Contrast AF – for both videos and photos. The V20 determines if LDAF or PDAF is best for a particular shot and then refines the focus with Contrast AF. Users can take full advantage of the V20 when capturing sharp images of friends or family in action, in any lighting conditions.

Gives You More of What You Love

Second Screen
The popular Second Screen feature that was first introduced on the V10 has improved in visibility. With double the brightness and 50 percent larger font size compared to the V10, the smaller display located above the main display allows users to easily view notifications and alerts in outdoor situations at a glance.

Now with the Expandable Notifications feature, users can tap a button on the Second Screen to enlarge notifications in order to check long messages at a glance and quickly send a reply or share information.

LG UX 5.0+
The LG V20 comes with the mobile user interface LG UX 5.0+ to make it easier to use the multimedia functions tailored to customer needs. The LG UX 5.0+ is an upgraded version of the LG UX 5.0 first introduced on the LG G5. It is also the world’s first smartphone interface to run on Android 7.0 Nougat.

The LG V20 also features Multi-window to display two apps at once in a split screen allowing users to drag text, images, and files from one app to another. The combination of these advancements together with the 5.7-inch main IPS Quantum Display offers the best in multitasking capabilities.

In Apps
The LG V20 is the world’s first phone to showcase Google’s In Apps. The new search mode featured in the Google app, helps users find content not only from built-in apps including contacts, emails, text messages and photos, but also from user-installed apps. It also enables users to discover recently accessed apps, people to get in touch with, messages to read or activity across apps without having to type a query.

Premium Design in a Durable Body

Premium Materials
To achieve both a sophisticated look and solid durability, LG uses lightweight aluminum, together with a new silicon-based material. AL6013 metal, found in aircraft, sailboats and mountain bikes, was selected to cover the back of the phone due to its sturdy but light properties. If dropped, the top and bottom of the phone are protected from damage by Silicone Polycarbonate (Si-PC). This innovative material, found in helmets, reduces shocks by more than 20 percent compared to conventional materials.

Durability
The LG V20 has also passed the MIL-STD 810G Transit Drop Test for durability conducted by an independent laboratory that conforms to U.S. military standards. The test determined that the V20 could withstand shocks and still function when dropped repeatedly from a height of four feet and landing in various positions, including the front, back, sides and corners.

“The LG V20 is designed to offer customers a more dynamic experience by building on the most popular video and audio features of the V series,” said Juno Cho, president of LG Electronics and Mobile Communications Company. “With the LG V20, we are giving our customers more of everything they love and less of anything they don’t need to set a new standard for premium smartphones.”

The LG V20 will be available in Korea starting this month followed by other regions. Information regarding other markets and launch dates will be announced locally in the weeks to come.